Being Here Is Everything: The Life of Paula Modersohn-Becker (Semiotext(e) / Native Agents) (Paperback) 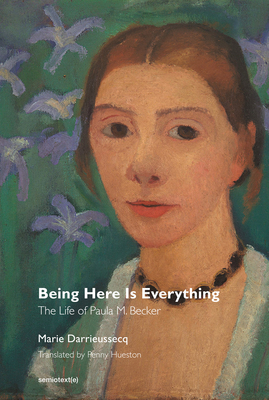 Paula Modersohn-Becker was the first woman to ever a paint a naked self-portrait. She was a friend of Rilke’s, an expressionist before expressionism, and she died giving birth at the age of 32. I knew none of that when I started reading this book, I had never heard of Paula Modersohn-Becker, and this book expects that you haven’t either. That’s part of the point. Being Here Is Everything is about the experience of being a female artist, more particularly, it’s about how your work interacts with your relationships and your body, especially your fertility. I want to thrust this into the hands of every female artist and writer who comes into this store, and every man who is in a relationship with one. You will rarely have read anything that feels so vital.

The short, obscure, and prolific life of the German expressionist painter Paula Modersohn-Becker (1876–1907), a significant figure in modernism.

First published in France in 2016, Being Here Is So Much traces the short, obscure, and prolific life of the German expressionist painter Paula Modersohn-Becker (1876–1907). In a brief career, cut short by her death from an embolism at the age of thirty-one, shortly after she gave birth to a child, Modersohn-Becker trained in Germany, traveled often to Paris, developed close friendships with the sculptor Clara Westhoff and the poet Rainer Maria Rilke, and became one of her generation's preeminent artists, helping introduce modernity to the twentieth century alongside such other painters as Picasso and Matisse.

Marie Darrieussecq's triumphant and illuminating biography at once revives Modersohn-Becker's reputation as a significant figure in modernism and sheds light on the extreme difficulty women have faced in attaining recognition and establishing artistic careers.

Marie Darrieussecq published her first novel, Pig Tales, in 1996 at the age of twenty-seven, and it became an overnight sensation and bestseller, selling more than 300,000 copies and translated into more than thirty languages. The New Yorker described her as France's “best young novelist,” and she is recognized as one of the leading voices of French contemporary literature. Her novel Men was awarded the Prix Médicis and the Prix des Prix in 2013.

A biography full of life force, drafted in the present with grace... Dazzling!

A magnetic portrait of a woman, taking shape through the seemingly simple, but always so beautiful, writing of Marie Darrieussecq.

Between the lines, this very beautiful text is read as a feminist manifesto, that constantly questions the place for women in art.

Darrieussecq's writing is poetic and stylized; the tableau unfolds sometimes in one-sentence paragraphs and one-word sentences, and always in the present tense. Clearly written for a broad audience, this book will renew appreciation for a deserving artist who's too often reduced to a mere passing mention in art-history textbooks.

Being Here is Everything should be read less as a definitive biography than as a tender, interpretative meditation by Darrieussecq. Through her interpretive paraphrasing of the artist's words, her textual narration of the paintings, and her omission of any visual reproductions of them (as well as of most of their titles), Darrieussecq writes a specific version of Modersohn-Becker's life. Though not a book of rigorous scholarship, she nonetheless makes a compelling and lyrical case for resuscitating Modersohn-Becker's reputation, and for exposing her paintings to a wider audience. As at long last we begin to color in the annals of art history with artists who once sat outside the traditional canon, the tapestry becomes all the more vivid with the inclusion of Modersohn-Becker's work.

Darrieussecq writes about her subject with a vibrant, urgent present tense-ness, as though Becker herself is unfolding before us. In prose propelled by temperamental rhythms—some paragraphs are half a page long, while others are but a single sentence—Darrieussecq composes a flickering tale that accounts for the artist's life, for the odd space of grief she feels for the artist she never knew but loves, and for the art Becker might have made.