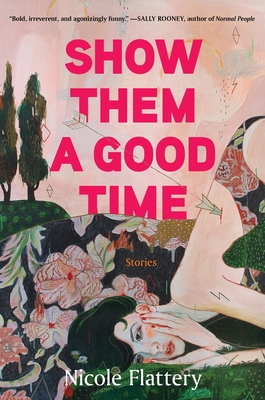 By Nicole Flattery
$24.00
On Our Shelves Now - Available to Ship to Your Home

"Show Them a Good Time is a master class in the short story-bold, irreverent and agonizingly funny." Sally Rooney, Author of Normal People and Conversations with Friends

A blisteringly original and wickedly funny collection of stories about the strange worlds that women inhabit and the parts that they must play.

A sense of otherworldly menace is at work in the fiction of Nicole Flattery, but the threats are all too familiar. SHOW THEM A GOOD TIME tells the stories of women slotted away into restrictive roles: the celebrity's girlfriend, the widower's second wife, the lecherous professor's student, the corporate employee. And yet, the genius of Flattery's characters is to blithely demolish the boundaries of these limited and limiting social types with immense complexity and caustic intelligence. Nicole Flattery's women are too ferociously mordant, too painfully funny to remain in their places.

In this fiercely original and blazingly brilliant debut, Flattery likewise deconstructs the conventions of genre to serve up strange realities: In Not the End Yet, Flattery probes the hilarious and wrenching ambivalence of Internet dating as the apocalypse nears; in Sweet Talk, the mysterious disappearance of a number of local women sets the scene for a young girl to confront the dangerous uncertainties of her own sexuality; in this collection's center piece, Abortion, A Love Story, two college students in a dystopian campus reconfigure the perilous stories of their bodies in a fraught academic culture to offer a subversive, alarming, and wickedly funny play that takes over their own offstage lives. And yet, however surreal or richly imagined the setting, Flattery always shows us these strange worlds from startlingly unexpected angles, through an unforgettable cast of brutally honest, darkly hilarious women and girls.

Like the stories of Mary Gaitskill, Miranda July, Lorrie Moore, Joy Williams, and Ottessa Moshfegh, SHOW THEM A GOOD TIME is the work of a profoundly resonant and revelatory literary voice – at once spiky, humane, achingly hilarious-- that is sure to echo through the literary culture for decades to come.

Nicole Flattery's work has been published in The Stinging Fly, The White Review, The Dublin Review, BBC Radio 4, The Irish Times and Winter Papers. She has also contributed a story to Faber's 2019 Anthology of New Irish Writing. A graduate of the master's program in Creative Writing at Trinity College, Dublin, she lives in Galway.

"Show Them a Good Time is a master class in the short story—bold, irreverent and agonizingly funny." - Sally Rooney, Author of NORMAL PEOPLE and CONVERSATIONS WITH FRIENDS

"Affecting and darkly funny . . . Posing biting questions about identity, sexuality and trauma, Show Them a Good Time is an offbeat yet moving look at contemporary womanhood." - TIME Magazine

"Flattery puts across finely observed everyday details with an absurd sensibility and has a talent for one-liners." - The New Yorker

"Flattery is a rising star . . . Her debut collection is a magnificently mordant work, full of delicious one-liners, perennially creeping menace, and hypnotically nihilistic depictions of cold-eyed young women trapped in strange, lonely, sometimes dystopian situations. . . . Reminiscent of the writing of Mary Gaitskill, Lorrie Moore, and Ottessa Moshfegh, Show Them a Good Time is a deft and dazzling work of pitch-black humor and deep, disquieting sorrow." - LitHub, Most Anticipated Books of 2020

"Nicole Flattery’s Show Them a Good Time was a fabulously entertaining record of what this gifted writer has been up to in the realm of short fiction—it’s very funny stuff. The pages just glide by, but there’s really difficult material and really knotty emotions thrumming along just beneath the blithe surface of things." - Kevin Barry, The Millions

"When I moved to New York, I was overwhelmed by the sense that everyone I encountered was desperately holding themselves together. I could not escape the feeling that I, too, must be very careful, that if I were not, some crack in my skin would open and spill my insides onto the sidewalk. Accompanying this vigilance was an impulse toward rebellion, the sense that if only I were reckless, I could finally have some fun. I came to fancy myself somewhat deranged and decided to leave it at that. There are many such women in Nicole Flattery’s outstanding collection Show Them a Good Time—women who are holding themselves together or flagrantly resisting the mandate to do so, in worlds both horrifying and hilarious. . . . [a] wry and devastating companion." - Paris Review

"A seamless blend of reality and the surreal, Flattery’s stories defy genre in an affecting yet unobtrusive manner. Readers should expect to be equal parts intrigued and unsettled." - Publishers Weekly

"Flattery's prose—absurd, painfully funny, and bracingly original—slingshots the stories forward. These female characters never say what you're expecting, and their insights are always incisive. . . . Nervy, audacious stories in which women finally get to speak their minds." - Kirkus Reviews

"Irish women writers are on fire, and Nicole Flattery is yet a further brilliant example … Ten smart stories about dating, relationships and the absurdities of modern life." - Elle.com

"Young Irish novelists like Sally Rooney, Belinda McKeon, Naoise Dolan, Rob Doyle and Nicole Flattery all attended Trinity College Dublin. In much of their fiction, there is a drama between a sense of new entitlement and the pull of home, the conflict between a self that had been bathed in a fragile cosmopolitanism and a family that sounded as though they belonged to a country and a century and a mindset that were far away...Rooney, McKeon, Dolan and Flattery have drawn portraits of young women in their books that are complicated and intricate and enigmatic. Their young women are educated and well-read; they think frankly about sex; they are free in the world. They have escaped the repressive Ireland that nourished the novels of Edna O’Brien and John McGahern." - Colm Toibin, The Wall Street Journal

"A blisteringly original and wickedly funny collection of stories . . . Like the stories of Mary Gaitskill, Miranda July, Lorrie Moore, Joy Williams, and Ottessa Moshfegh, Show Them a Good Time is the work of a profoundly resonant and revelatory literary voice—at once spiky, humane, achingly hilarious—that is sure to echo through the literary culture for decades to come." - Paperback Paris

"Mind-blowing; by turns macabre, ferociously funny and concerned with what’s been called, ‘the dark comedy of women’s lives.’ Like Rooney, Flattery sometimes focuses on the idea of ‘normal’ as a surreal concept with one character describing her hometown in Ireland as, ‘a strange place dressed up as a normal place.’ " - Globe and Mail

"There’s laughter in the dark and darkness in the laughter in these fabulously astute stories that are at once surreal and more real than reality. Nicole Flattery is so good." - Melissa Broder, author of THE PISCES

"Demands repeated reading. These stories are very funny, and very sad, usually at the same time. Which, as Flattery shows us brilliantly, is the best time." - Jon McGregor author of RESERVOIR 13

"Nicole Flattery’s short stories stab and slip, cutting without immediately alerting you to that fact. . . . the stories stretch out... ‘Even the catastrophe of my own life was something I managed with amazing slowness,’ one narrator says. Such patience allows Flattery to write past simpler endings and arrive somewhere oblique or unexpected. What sticks is her deadpan stare, the precision of her humor—that feeling that sometimes the funniest person in the room is the one who isn’t laughing." - The A.V. Club, "7 books from the first half of 2020 that more people should read"

"Flattery, whose stories have been compared to Lorrie Moore’s, depicts dead-end jobs and the grinding fear of poverty. While her style is jaunty and enlivening—Groucho Marx funny—her young women are even less hopeful than Moore’s. They’re held hostage by the economic machinery of their lives. . . . Beneath the one-liners and clever dark comedy, Show Me a Good Time shows real daring." - Bookforum

"Flattery’s judgments crackle with cruel, clear sight . . . The book’s epigraph comes from Lorrie Moore, who is an obvious influence on the high-wire style, those seductive insights armored with glittering wit against the pain they describe. Flattery writes with empathy, freedom and virtuosic technique: this debut announces the arrival of a brilliant talent." - Luke Brown, Financial Times

"Excellent . . . Honoring the feelings and desires we’re told to repress can be a way to free ourselves, to wake up, to live on. Nicole Flattery, in SHOW THEM A GOOD TIME, has created a compelling and fascinating first collection, at once vivid and ominous, hilarious and able to walk, unflinching, into the dark." - Washington Independent Review of Books

"At its best, which is often, Flattery’s prose has a thrilling relentlessness and rhythmical snap to it; it pummels and excites." - The Guardian

"The book is a bit like drinking: refreshingly obliterative, realistically distorted. … some of the most concrete aspects of the book are provided by the dialogue, which, as in Lorrie Moore or Deborah Eisenberg, often contains much of the stories’ movement as it delivers funny little zaps to the main character’s perspective." - London Review of Books

"Just when we think we know where Flattery is going she disorients us by changing tack and veering off-course into surreal territory. . . . The best tales blend personal pain and mordant wit, and are seductively offbeat and pleasingly on point." - Minneapolis Star Tribune