Serenade for Nadia: A Novel (Paperback) 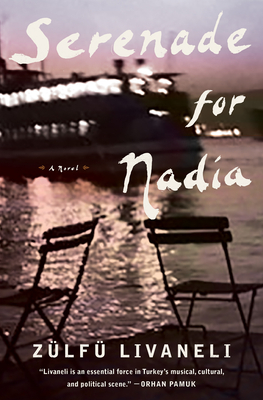 In this heartbreaking Turkish novel based on the real-life sinking of a refugee ship during World War II, an elderly professor leaves America to revisit the city where he last glimpsed his beloved wife.

Istanbul, 2001. Maya Duran is a single mother struggling to balance a demanding job at Istanbul University with the challenges of raising a teenage son. Her worries increase when she is tasked with looking after the enigmatic Maximilian Wagner, an elderly German-born Harvard professor visiting the city at the university’s invitation. Although he is distant at first, Maya gradually learns of the tragic circumstances that brought him to Istanbul sixty years before, and the dark realities that continue to haunt him.

Inspired by the 1942 Struma disaster, in which nearly 800 Jewish refugees perished after the ship carrying them to Palestine was torpedoed off the coast of Turkey, Serenade for Nadia is both a poignant love story and a gripping testament to the power of human connection in crisis.

Zülfü Livaneli is Turkey’s bestselling author, a celebrated composer and film director, and a political activist. Widely considered one of the most important Turkish cultural figures, he is known for his novels that interweave diverse social and historical backgrounds, figures, and incidents, including the critically acclaimed Bliss (winner of the Barnes & Noble Discover Great New Writers Award), Leyla’s House, My Brother’s Story, and The Eunuch of Constantinople, which have been translated into thirty-seven languages, won numerous international literary prizes, and been turned into movies, stage plays, and operas.

Brendan Freely was born in Princeton in 1959 and studied psychology at Yale University. His translations include Two Girls by Perihan Mağden, The Gaze by Elif Şafak, and Like a Sword Wound by Ahmet Altan.

“[An] affecting novel about love, loss, and personal identity…Livaneli smoothly switches between 2001 and 1938–1942, offering insights into Turkey’s rich cultural, political, ethnic, and religious divides. Livaneli’s worthy portrait of a man coming to terms with his tragic past and a woman coming to terms with her Turkish heritage delivers a forceful plea for openness and tolerance.” —Publishers Weekly

“Heartbreakingly vivid…Livaneli’s passion in exposing Turkey’s and the West’s culpability in real massacres is eloquent…[Serenade for Nadia is] hard to forget.” —Kirkus Reviews

“Writer. Musician. Philosopher. Zülfü Livaneli is one of my favorite authors. With Serenade for Nadia, he has written a masterpiece about love and music, connecting Turkey’s complex and rich history to the present day. So happy that Livaneli’s words can now inspire millions more with this new English translation, and that the world will get to know one of the true cultural treasures coming out of Turkey.” —Hamdi Ulukaya, CEO of Chobani

“This wonderfully evocative novel does far more than introduce one of Turkey’s great creative artists to American audiences. It is also a fast-paced and intensely emotional account of modern history that leads us to reflect on the ways that people and nations confront their past.” —Stephen Kinzer, author of Crescent and Star: Turkey Between Two Worlds

“A great book about a lifelong love.” —Frankfurter Allgemeiner Zeitung

“A symphony that reads like a classic.” —Neue Zurcher Zeitung

“An exciting and informative book that you will not be able to put down.” —Stuttgarter Zeitung

“An immensely thrilling novel.” —The Press

“I loved this book so much that I sent a fan letter to the publisher, and demanded to be introduced to the author when I went to Istanbul. Bliss is fresh, original, and warm-hearted, the work of a cosmopolitan insider and multi-talented artist.” —Louis de Bernières, author of Corelli's Mandolin

“Eye-opening and deeply moving—essential for anyone looking for decency in the world today.” —Kirkus Reviews(starred review)