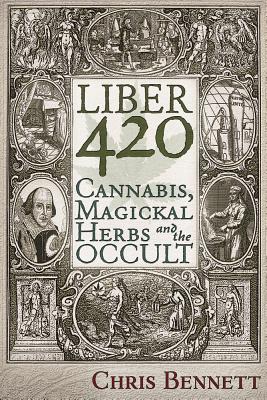 Although little known, cannabis and other psychoactive plants held a prominent and important role in the Occult arts of Alchemy and Magic, as well as being used in ritual initiations of certain secret societies. Find out about the important role cannabis played in helping to develop modern medicines through alchemical works. Cannabis played a pivotal role in spagyric alchemy, and appears in the works of alchemists such as Zosimos, Avicenna, Llull, Paracelsus, Cardano and Rabelais. Cannabis also played a pivotal role in medieval and renaissance magic and recipes with instructions for its use appear in a number of influential and important grimoires such as the Picatrix, Sepher Raxiel: Liber Salomonis, and The Book of Oberon. Could cannabis be the Holy Grail? With detailed historical references, the author explores the allegations the Templars were influenced by the hashish ingesting Assassins of medieval Islam, and that myths of the Grail are derived from the Persian traditions around the sacred beverage known as haoma, which was a preparation of cannabis,opium and other drugs. Many of the works discussed, have never been translated into English, or published in centuries. The unparalleled research in this volume makes it a potential perennial classic on the subjects of both medieval and renaissance history of cannabis, as well as the role of plants in the magical and occult traditions.

“Bennett has done it again. Going right to the primary sources, he has produced an extraordinary volume outlining the history and occult secrets of cannabis. … Should you be interested in knowing how and why cannabis found employment in the occult arts throughout history, take heart in knowing that you hold in your hands the definitive work written by a brilliant historian.” —Tom Hatsis, author of The Witches' Ointment: The Secret History of Psychedelic Magic (2015)

"In his latest effort, Bennet has uncovered and amassed an overwhelming amount of evidence in support of his claim that cannabis played a central role in many of the Western esoteric traditions, including Alchemy, ceremonial magick—and yes, even factions of Freemasonry! Liber 420 is sure to cause a stir within the Masonic community!" —P.D. Newman, 32° Scottish Rites Freemason and author of Alchemically Stoned: The Psychedelic Secret of Freemasonry (2017)

:The Holy Grail of historical cannabis books. A tremendous scholarly work, ridiculously well-researched and referenced, that entertains and delights, replete with amazing artwork and fresh ideas about the church versus 'the devil’s weed,' cannabis as a religious sacrament, the hashishin, witches, baptism by fire, and my favorite—the elixir of immortality." —Julie Holland, MD, Editor The Pot Book: A Complete Guide to Cannabis; Ecstasy : The Complete Guide : A Comprehensive Look at the Risks and Benefits of MDMA

"Bennett explores some interesting themes in his latest book regarding the use of liquid concoctions in certain lost Masonic rites and occult orders." —Dr. David Harrison, author of The Genesis of Freemasonry (2009) and The Lost Rites and Rituals of Freemasonry (2017)

"He has followed the white rabbit through the Picatrix and the Solomonic texts, to the Rosicrucians, to the Masons and the occult lodges of the 19th Century, through alchemy, witchcraft, and much more. Cannabis and other mind-altering substances have been an underground and occluded fact of the Western Mystery Tradition all along." —Aaron Leitch, author of Secrets of the Magickal Grimoires: The Classical Texts of Magick Deciphered (2005)

"The latest book to arrive on my desk this morning is Liber 420 by Chris Bennett. It is an Excellent book—very well researched. Even if you are not interested in cannabis, it is an excellent survey of the development of magic, alchemy, the Templars and Freemasonry from a fresh perspective. 777 pages of well written information with many B/W illustrations never seen before." —Stephen Skinner, Author of Sacred Geometry: Deciphering the Code and Techniques of Solomonic Magic

"Liber 420: Cannabis, Magickal Herbs & the Occult... is literally anything and everything you’d want to know about the occulted use of cannabis in religion, mystery traditions, magickal rituals, alchemy and much more" —Occulture

"With legalization of cannabis a central theme in politics today, the timing could not be better for this information to reach the public. This book should be sold in every dispensary. The abundant proof from a wide variety of sources, and the internal consistency of the patterns revealed, leave little doubt that even the most illustrious among our spiritual ancestors knew not only the usefulness of hemp, and the healing qualities of cannabis, but also the entheogenic properties of THC." —Ronnie Pontiac, Newtopia Magazine

"I highly recommend this grand treatise... Well researched, well written, well illustrated. Given the size of this book, the price is quite reasonable." —David Allen Hulse, author of The Key of it All: The eastern mysteries and The Western Mysteries: An Encyclopedic Guide to the Sacred Languages & Magickal Systems of the World