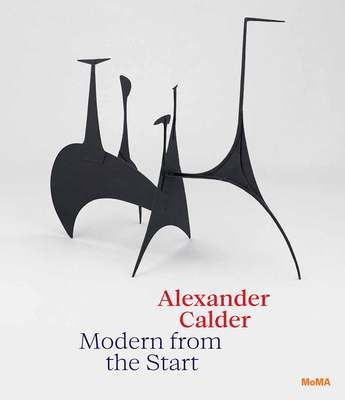 On Alexander Calder's fruitful, creative and enduring relationship with MoMA, from the early wire sculptures to late abstractions

Alexander Calder's work first appeared in the Museum of Modern Art's galleries in 1930, in the exhibition Painting and Sculpture by Living Americans. Over the next decades the artist's connection with the Museum would be deep, productive and mutually beneficial. Calder cultivated friendships and working relationships with notable figures, including Alfred H. Barr Jr., the Museum's founding director, and James Johnson Sweeney, with whom he collaborated on his expansive retrospective exhibition in 1943. His work is imprinted on MoMA's early history, not only for its material and conceptual innovation but also for its presence at significant moments, such as a mobile made to hang over the lobby's grand staircase on the occasion of the new Goodwin and Stone building (Lobster Trap and Fish Tail, which hangs there to this day); an elaborate candelabra to adorn the tables at a celebratory anniversary event; and a sculpture to fly off a flagpole to advertise the landmark exhibition Cubism and Abstract Art.

Alexander Calder: Modern from the Start celebrates this extraordinarily fertile relationship between an institution and an artist who was both an important creative partner and, with his magnificent gift of 19 works in 1966, a major donor. Through MoMA, Calder came to be known as a pioneer of modern sculpture, and through Calder, MoMA came to understand itself as an American museum of modern art. After studying engineering, Alexander Calder (1898-1976) moved to Paris in the late 1920s, where he found himself at the center of the city's artistic avant-garde. There, he developed his Cirque Calder, a performance artwork comprising dozens of miniature handmade objects, and a group of standalone figurative works in wire. Turning toward abstraction in 1930, Calder invented the mobile--an abstract sculpture made of independent parts that incorporate natural or mechanical movement. He would continue to explore the possibilities of this visual language for the rest of his career, eventually shifting to monumental constructions and public works.