The Kitchen Pantry Scientist Biology for Kids: Science Experiments and Activities Inspired by Awesome Biologists, Past and Present; with 25 Illustrated Biographies of Amazing Scientists from Around the World (Paperback) 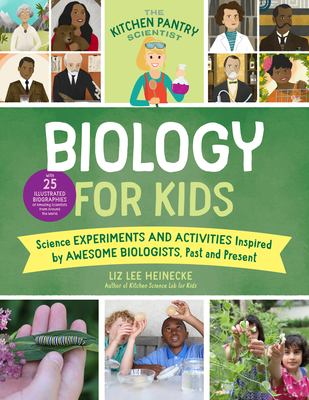 This is book number 2 in the The Kitchen Pantry Scientist series.

Aspiring young biologists will discover an amazing group of inspiring scientists and memorable experiments in Biology for Kids, the second book of The Kitchen Pantry Scientist series.

Play disease detective to learn how John Snow tracked down the source of a cholera epidemic. Learn about biologist Ernest Everett Just’s discoveries and experiment with osmosis using eggs with dissolved shells. Make your own agar plates for growing bacteria and fungi just like Fannie Hess.

This engaging guide offers a series of snapshots of 25 scientists famous for their work with biology, from ancient history through today. Each lab tells the story of a scientist along with some background about the importance of their work, and a description of where it is still being used or reflected in today’s world.

A step-by-step illustrated experiment paired with each story offers kids a hands-on opportunity for exploring concepts the scientists pursued, or are working on today. Experiments range from very simple projects using materials you probably already have on hand, to more complicated ones that may require a few inexpensive items you can purchase online. Just a few of the incredible people and scientific concepts you’ll explore:

Louis Pasteur (b. 1822)
Make a flask like Pasteur’s to grow microbes from the air.
Scientific concepts: microbial fermentation and germ theory

Rae Wynn-Grant (b. 1985)
Use cookie crumbs to attract ants. Observe the behavior of ants and other animals.
Scientific concepts: ecology and animal behavior

Biology is the name for the study of living organisms, but long before the word biologist was coined, people around the world realized that by studying the world around them, they could improve their lives. Learning about plants and insects helped them discover new medicines and grow better crops. Studying animals taught them how to raise healthy poultry, cattle, and horses for food, farming, and transportation.

Today’s biologists study everything imaginable. From oceans, jungles, and cities to the space station, the universe is their laboratory. Like those who went before them, they are fascinated by plants, animals, and microbes and understand that their discoveries can make the world a better place for all living things.

With this fascinating, hands-on exploration of the history of biology, inspire the next generation of great scientists.

Dig into even more incredible science history from The Kitchen Pantry Scientist series with: Chemistry for Kids, Physics for Kids, Math for Kids, and Ecology for Kids.

Liz Lee Heinecke has loved science since she was old enough to inspect her first butterfly. After working in molecular biology research for 10 years and earning her master’s degree, she left the lab to kick off a new chapter in her life as a stay-at-home mom. Soon, she found herself sharing her love of science with her three kids as they grew, chronicling their science adventures on her KitchenPantryScientist website. Her desire to share her enthusiasm for science led to regular television appearances, an opportunity to serve as an Earth Ambassador for NASA, and the creation of an iPhone app. Her goal is to make it simple for parents to do science with kids of all ages, and for kids to experiment safely on their own. Liz graduated from Luther College and received her master’s degree in bacteriology from the University of Wisconsin, Madison. She is the author of Kitchen Science Lab for Kids, Kitchen Science Lab for Kids: Edible Edition, Outdoor Science Lab for Kids, STEAM Lab for Kids, Sheet Pan Science, and Little Learning Labs: Kitchen Science for Kids. Her namesake series, The Kitchen Pantry Scientist, pairs illustrated biographies with engaging hands-on activities inspired by their work. The books in that series include: Chemistry for Kids, Biology for Kids, Physics for Kids, and Math for Kids.

Kelly Anne Dalton is a professional artist and illustrator living in the wild mountains of Montana. Working from her charming 1920s studio, Kelly Anne loves creating a wide range of work, from children’s books to decorative greeting cards and gifts. Growing up with a biologist mother, Kelly has had an appreciation for science and nature her entire life, and because of that, she enjoys creating the portraits for the Kitchen Pantry Scientist series. When not drawing, Kelly Anne can be found trail running in the forest, playing with her dogs, and adventuring with her husband.

The Kitchen Pantry Scientist: Biology for Kids is packed full of fun, educational experiments and activities that are anchored by biographies of biologists who transformed science. This book introduces readers to scientists of color, past and present, who have made significant contributions, but who are often unrecognized because of prejudice. This is such a thoughtful book from Liz Lee Heinecke who continues to provide inspiring resources for engaging kids in STEM

Biology for Kids is an absolute delight! Charming illustrations complement the substantive biology topics, famous biologist bios, and easy-to-conduct demonstrations and experiments. The featured scientists represent a diversity of biological fields and the population at large. As a career biologist, I confidently recommend this book for budding naturalists and biologists—Joanne Manaster, Senior Instructor in Biology, University of Illinois, Urbana-Champaign