The Hole: A Novel (Hardcover) 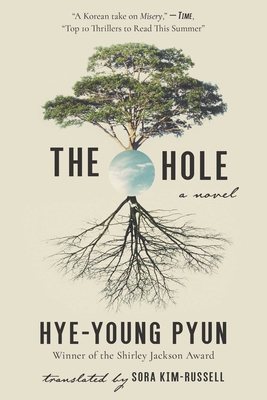 Winner of the 2017 Shirley Jackson Award
Named One of the Top 10 Thrillers to Read This Summer by Time Magazine.

In this tense, gripping novel by a rising star of Korean literature, Oghi has woken from a coma after causing a devastating car accident that took his wife's life and left him paralyzed and badly disfigured. His caretaker is his mother-in-law, a widow grieving the loss of her only child. Oghi is neglected and left alone in his bed. His world shrinks to the room he lies in and his memories of his troubled relationship with his wife, a sensitive, intelligent woman who found all of her life goals thwarted except for one: cultivating the garden in front of their house. But soon Oghi notices his mother-in-law in the abandoned garden, uprooting what his wife had worked so hard to plant and obsessively digging larger and larger holes. When asked, she answers only that she is finishing what her daughter started.

A bestseller in Korea, award-winning author Hye-young Pyun's The Hole is a superbly crafted and deeply unnerving novel about the horrors of isolation and neglect in all of its banal and brutal forms. As Oghi desperately searches for a way to escape, he discovers the difficult truth about his wife and the toll their life together took on her.

Hye-young Pyun was born in 1972. She made her literary debut in Korean in 2000 when she won Seoul Shinmun's annual New Writer's Contest with her short story "Shaking Off Dew." She has gone on to publish four short story collections and five novels. She has received several of Korea's most prestigious literary awards, including the Dong-in Literary Award in 2011, the Yi-sang Literary Award in 2014, and the Hyundae Munhak Award in 2015. She has published short stories in The New Yorker, Harper's Magazine, and Words Without Borders. City of Ash and Red was named Book of the Year when it was published in Poland, and it has been licensed to France, Turkey, China, and Vietnam as well. Her novel The Hole is a finalist for the Shirley Jackson Award. She lives in Seoul, Korea.

Sora Kim-Russell is a literary translator based in Seoul. Her translations include Hwang Sok-yong’s Princess Bari, Suah Bae’s Nowhere to be Found, and Kyung-sook Shin’s I’ll Be Right There. She teaches at Ewha Womans University and the Literary Translation Institute of Korea. Her full list of publications can be found at sorakimrussell.com.

"A Korean take on Misery," —Time magazine, "Top 10 Thrillers to Read This Summer"