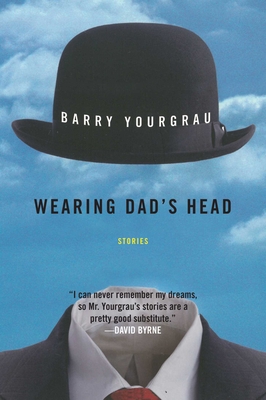 “I can never remember my dreams, so Mr. Yourgrau’s stories are a pretty good substitute.” —David Byrne

Barry Yourgrau’s imagination makes critics reach: Fellini? Kafka? Freud in a funny hat? Yourgrau is a fantasist like no other. His stories run brief and hallucinatorily vivid in style, heart-jarring and intimate in emotion. As Susan Cheever puts it: “Odd, true, and thoroughly hilarious.”

Here is Barry Yourgrau’s celebrated second book, which focuses his transfiguring surreal imagination on our most personal institution: family. Wearing Dad’s Head constructs an oedipal uproar of genres and realities, preserving the wild poetry and pathos of childhood, young and old. Dream awake in the Yourgrau domestic universe, where father and son go on safari in the suburbs, mother has fun being struck by lightning, a cow gets dolled up in lingerie, and a family ghost whines on and on about a tweed coat. Where parents die but just won’t go away. No other writer today can twist reality with such glee and tender-hearted poignancy. Wearing Dad’s Head—a classic of its own genre—will undoubtedly enchant and stupefy readers.

Barry Yourgrau is a writer and performance artist. He is also the author of Mess: One Man’s Struggle to Clean Up His House and His Act as well as A Man Jumps Out of an Airplane, Haunted Traveller, and The Sadness of Sex, which was adapted into a movie in which he stars. He and his work have appeared on MTV’s Unplugged: Spoken Word and NPR’s All Things Considered and Selected Shorts, among others. He lives in New York and Istanbul.

“One could only wish that most of our better known playwrights were writing at the level of Yourgrau’s fiction.” —Los Angeles Times

“One could only wish that most of our better known playwrights were writing at the level of Yourgrau’s fiction.” —Los Angeles Times