"There Is a North": Fugitive Slaves, Political Crisis, and Cultural Transformation in the Coming of the Civil War (Paperback) 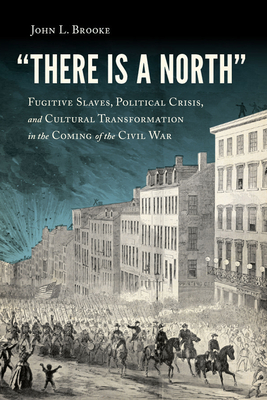 How does political change take hold? In the 1850s, politicians and abolitionists despaired, complaining that the "North, the poor timid, mercenary, driveling North" offered no forceful opposition to the power of the slaveholding South. And yet, as John L. Brooke proves, the North did change. Inspired by brave fugitives who escaped slavery and the cultural craze that was Uncle Tom's Cabin, the North rose up to battle slavery, ultimately waging the bloody Civil War.

While Lincoln's alleged quip about the little woman who started the big war has been oft-repeated, scholars have not fully explained the dynamics between politics and culture in the decades leading up to 1861. Rather than simply viewing the events of the 1850s through the lens of party politics, "There Is a North" is the first book to explore how cultural action—including minstrelsy, theater, and popular literature—transformed public opinion and political structures. Taking the North's rallying cry as his title, Brooke shows how the course of history was forever changed.

"It turns out that the publication of Uncle Tom's Cabin did more to establish the Republican Party than the caning of Charles Sumner. By combining the sensitivity of a cultural historian with the savvy of a political historian, John L. Brooke offers us a remarkable, and remarkably persuasive, new account of the emergence of antislavery politics in the early 1850s."—James Oakes, author of The Scorpion's Sting: Antislavery and the Coming of the Civil War

"This beautifully written, elegantly theorized, and deeply researched book offers a fresh and timely examination of the intertwined political and cultural crises and forces leading to the American Civil War."—Alice Fahs, coeditor of The Memory of the Civil War in American Culture

"[A]n admirably wide-ranging and expansive discussion of this critical period in United States history. We are indebted to Brooke for this provocative approach to troubled times. I have no doubt it will be the center of discussion in graduate seminars for a long time."—The New England Quarterly

"Brooke's book is a meaty one that makes a significant scholarly contribution by offering a theoretical construct within which to view the interaction between culture and politics in the coming of the Civil War. The book also is notable for its in-depth discussion of the centrality of Harriet Beecher Stowe's Uncle Tom's Cabin in generating northern anti-slavery sentiment."—Journal of the Civil War Era

"Brooke makes a compelling case for how culture reinforced and even prompted political change at a time when inertia had paralyzed national political institutions . . . 'There Is a North' expertly synthesizes the recent literature on the politics of the 1850s and demonstrates a fascinating model for how to understand the dramatic changes that American politics and society endured in the decade leading up to the Civil War."—American Historical Review

"Brooke does a masterly job untangling the messy political world of proslavery, antislavery, conservative Whigs and Democrats, and nativists. His presentation of evidence for the importance of Stowe’s work certainly gives weight to Abraham Lincoln’s remark that she was the author of the Civil War itself. If one wants a work that captures the cultural and political feel of the decade leading up to the Civil War, this is such a book."—Journal of American History

"Brooke has produced a well-argued and well-written monograph. There Is a North will no doubt spark conversation in graduate courses; many of its chapters would be suitable to assign for undergraduates, as well. In addition to speaking to those in other disciplines, such as American studies and literature, it will be useful for cultural and political historians alike."—Civil War Book Review

"With vivid detail and prodigious archival research, . . . Brooke illuminates how the reading of Uncle Tom worked to disrupt routine understandings and assumptions.”—Journal of the Early Republic

"Brooke is inviting us to challenge our own certainties about the period and the national and cultural processes at play across it. Nuanced and considered, this is work that must now be factored in to our reading, writing and teaching of the later antebellum years, to our explanations of the impact of the Fugitive Slave Law, the rise of the Republican Party, the reception as well as the racial and gendered implications of Uncle Tom's Cabin, and the idea of the Civil War as a Second American Revolution with all that this implies."—Slavery & Abolition