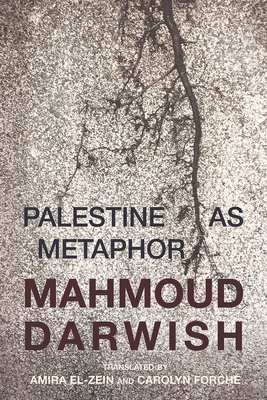 The five lengthy interviews collected here are not only an ars poetica from one of the most significant writers of the twentieth century; together they comprise an important statement of vocational solidarity between poets and the dispossessed, conveying Palestinian reality to a global readership, and the author's own history to multicultural reservoirs of myth. Darwish's worldliness is coerced, of course, as an artist's response to the difficulty of exile, yet he identifies himself as a "Trojan poet," on the side of all those who refuse surrender in apparent defeat.

Palestine as Metaphor consists of a series of interviews with Mahmoud Darwish, which have never appeared in English before. The interviews are a wealth of information on the poet’s personal life, his relationships, his numerous works, and his tragedy. They illuminate Darwish’s conception of poetry as a supreme art that transcends time and place.

Several writers and journalists conducted the interviews, including a Lebanese poet, a Syrian literary critic, three Palestinian writers, and an Israeli journalist. Each encounter took place in a different city from Nicosia to London, Paris, and Amman.

These vivid dialogues unravel the threads of a rich life haunted by the loss of Palestine and illuminate the genius and the distress of a major world poet.

Mahmoud Darwish, born in 1941 in the village of al-Birweh, Palestine, was the author of over two dozen volumes of poetry and prose. When he died in the summer of 2008, he was mourned throughout the world as a voice of the Palestinian people—author of their official declaration of independence and, most importantly, a poet of the highest invention and beauty. Mohammad Shaheen is a professor of English at the University of Jordan. Amro Naddy has worked as an editor at the Virginia Quarterly Review. He teaches at the King’s Academy in Amman, Jordan.

AMIRA EL-ZEIN is a poet, translator, and Associate Professor of Arabic Literature and Culture at Georgetown University in Qatar. CAROLYN FORCHÉ is the author of four books of poetry, and the editor of two best-selling poetry anthologies, Against Forgetting and Poetry of Witness.

“A brilliant poet—certainly the most gifted of his generation in the Arab world.”

"These interviews are a rich trove of his reflections on his art, personal revelations, and political insight ' vivid and fluid translations, one clearly hears Darwish's voice: self-assured yet sensitive, witty yet sincere.

Any reader who has enjoyed Darwish's poetry or prose collections would surely also enjoy these exchanges.

No other poet has expressed the fractured and discontinuous experiences of the Palestinian people as well and as powerfully as Mahmoud Darwish. His considerable work amounts to an epic effort to transform the lyrics of loss into the tragic drama of exile's indefinite aftermath. A poet who had the stylistic virtuosity and artistic gift to express the collective sentiments of a people without overlooking the most intimate textures of individual life, Darwish's great achievement was to also reveal how there was scarcely any language that existed which could adequately represent the unfixed and unsettled life of a people who have, since their expulsion from British Mandatory Palestine in 1948, lived as refugees and exiles in a realm without place and in the time of an ending without end. This selection of remarkable interviews with Darwish, translated and published in English for first time in Palestine as Metaphor, shows his thought in action as it traverses the intellectual and territorial boundaries that have been imposed at an extraordinary cost to human life and dignity."
— Andrew Rubin, editor of The Selected Works of Edward Said, author of Archives of Authority: Empire, Culture and the Cold War, and visiting professor in the School of Arts and Humanities at the University of Texas at Dallas

Mahmoud Darwish is indispensable. His work makes us question our hearts, takes us apart and leaves us space to reassemble ourselves. Palestine as Metaphor, elegantly translated by long time friends Amira El-Zein and Carolyn ForchÃ©, is an essential reader. This collection of five interviews opens the curtain to the mind and spirit, life and oeuvres of the literary visionary. His views on poetry and passion, exile and existence, offer us sheltera room, musical note, breath. His answers stir fundamental questions, and these questions become a language to imagine in, an image infinite and impassioned. This book transforms us as we cross each sentence."
— Nathalie Handal, author of Life in a Country Album

Darwish narrates Palestine, conflict and confrontation, love, exile, loss and return in a profound, sensitive and assertive tone which illustrates both his individuality and his attachment to Palestine and the Palestinian people ' Reading Darwish's interviews is equivalent to immersing one's self in an unrivalled metaphor. His language is impeccable, passionate and pondering, like an extension of his verses which resonate upon every reading. What is conventionally associated with Darwish is dismantled through the poet himself, allowing the reader to arrive at a deeper understanding, and one that reads like a timeless and regenerating revelation of the man and his poetry."