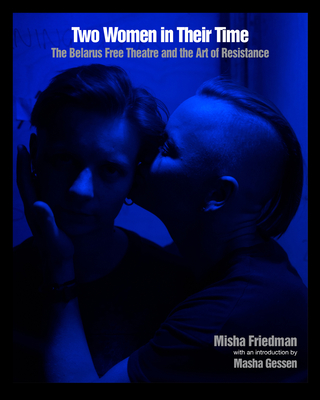 By Misha Friedman, Masha Gessen (Introduction by)
$21.99
On Our Shelves

In the fall of 2017, the internationally acclaimed underground theater troupe Belarus Free Theatre took New York by storm for a production of their harrowing anti-torture, anti-Putin play, Burning Doors. They were joined by Maria Alyokhina, a member of Russian punk group Pussy Riot, who made international headlines when they were imprisoned for staging an anti-Putin performance in a Moscow cathedral. The play met with enthusiastic acclaim from critics, with New York magazine praising it as a smart, smoldering, physically brutal piece of theater.

In Two Women in Their Time, award-winning documentary photographer Misha Friedman and New Yorker reporter Masha Gessen take us backstage, giving us an intimate look at this fiercely creative drama troupe that cannot officially perform in its homeland, which remains a dictatorship in all but name. The result is an astonishing series of photos documenting the group's productions in New York and Gessen and Friedman's visit to Minsk to meet Svetlana Sugako and Nadezhda Brodskaya, the young lesbian couple who keep the Belarus Free Theatre running. They live a life in the borderlands--between underground and public, between the closet and being out, in a country where same-sex sexual activity is legal yet remains taboo. Their work proves that queerness will always be dangerous to autocracy.

Two Women in Their Time was designed by Emerson, Wajdowicz Studios (EWS).

Misha Friedman is an award-winning documentary photographer whose photographs have appeared in the New York Times, the Los Angeles Times, and the New Yorker, among other publications. The author of Lyudmila and Natasha: Russian Lives, he lives in New York City. Masha Gessen is the author of Surviving Autocracy, the National Book Award-winning The Future Is History: How Totalitarianism Reclaimed Russia, and The Man Without a Face: The Unlikely Rise of Vladimir Putin. A staff writer at the New Yorker and the recipient of numerous awards, including a Guggenheim Fellowship and a Carnegie Fellowship, Gessen teaches at Amherst College and lives in New York City.