The Long-winded Lady: Notes from The New Yorker (Paperback) 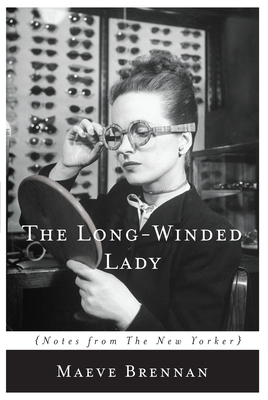 For more than twenty years in the pages of the New Yorker's Talk of the Town section, Maeve Brennan wrote about what it was like to be a woman, alone, and an outsider in New York. An Irish immigrant who published as 'the Long-Winded Lady, 'Brennan wrote about the New York of the 50s and 60s like nobody else. She reported from subway cars and shoe stores and tables-for-one. In her city, it is nearly always raining, or else she is pretending to read at a diner, eavesdropping on people who don't see her. More profound and moving than anything written by Joseph Mitchell or John Cheever in the same era, this book is one of the few I always return to when I am finding this city difficult to love.

I read this during a time when I was working entirely too much, but, exhausted at the end of the day, this book always made me crack a smile. If you find yourself falling out of love with NYC, read this and fall back in.

From 1954 to 1981, Maeve Brennan wrote for The New Yorker's "Talk of the Town" department under the pen name "The Long–Winded Lady." Her unforgettable sketches—prose snapshots of life in small restaurants, cheap hotels, and crowded streets of Times Square and the Village—together form a timeless, bittersweet tribute to what she called the "most reckless, most ambitious, most confused, most comical, the saddest and coldest and most human of cities." First published in 1969, The Long–Winded Lady is a celebration of one of The New Yorker's finest writers.

Maeve Brennan left Ireland for American in 1934, when she was seventeen. In 1949, she joined the staff of The New Yorker, to which she contributed reviews, essays, and short stories. Her acclaimed works The Rose Garden, The Visitor, and The Springs of Affection are also available from Counterpoint. Maeve Brennan died in 1993 at the age of seventy–six.

PRAISE FOR THE LONG–WINDED LADY:

"This is another timely recommendation as a new edition of Irish–born, Maeve Brennan's short story collection The Springs of Affection has just been reprinted by the Dublin–based press Stinging Fly. I'd definitely urge readers to seek this out too, but personally I have a soft spot for her non–fiction. Between 1954 and 1968 Brennan supplied copy for the New Yorker's Talk of the Town section under the fabulous pen name ‘The Long–Winded Lady'. Her vignettes of Manhattan life combine the detachment of the flaneuse with the lived experience of her own street–dwelling subjects – especially poignant given Brennan became homeless towards the end of her life and lived out of the ladies' bathroom at the offices of the New Yorker." —BBC

"Of all the incomparable stable of journalists who wrote for The New Yorker during its glory days in the Fifties and Sixties—AJ Leibling, Joseph Mitchell, Lillian Ross and John McPhee are all worth seeking out—the most distinctive was Irish–born Maeve Brennan. Her keen–eyed observation of the minutiae of New York life has been compared to Turgenev, but a closer parallel is Edward Hopper... Anyone familiar with New York will enjoy a transporting jolt of recognition from these pages. Looking back from our own time, when it seems that every column has to be loaded with hectoring opinion and egotistical preening, Brennan's stylish scrutiny of minor embarrassments and small pleasures is as welcome as a Dry Martini."—The Independent

"Every piece in this collection is as precise and as surprising as ["A Young Man with a Menu"; anyone who loves New York, The New Yorker, or Maeve Brennan will savor The Long–Winded Lady."—Alix Wilber

"[Brennan] has always been able to turn quite ordinary things into ‘moments of recognition…The accomplishment is formidable—something few writers attempt without sounding precise, dull, or both."—Time

"Maeve had a quickness of wit, a sharp tongue, and the gift of style… Bitter, dazzling, talented, tenderhearted, intractable Maeve!"—Brendan Gill