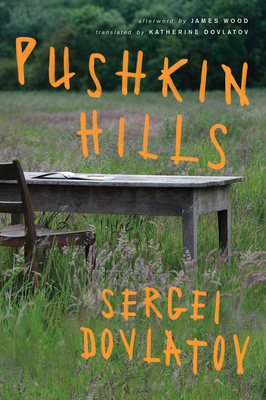 By Sergei Dovlatov
$24.00
This book is out of stock indefinitely, unable to order at this time.

An unsuccessful writer and an inveterate alcoholic, Boris Alikhanov has recently divorced his wife Tatyana, and he is running out of money. The prospect of a summer job as a tour guide at the Pushkin Hills Preserve offers him hope of regaining some balance in life as his wife makes plans to emigrate to the West with their daughter Masha, but during Alikhanov's stay in the rural estate of Mikhaylovskoye, his life continues to unravel.

Populated with unforgettable characters—including Alikhanov's fellow guides Mitrofanov and Pototsky, and the KGB officer Belyaev—Pushkin Hills ranks among Dovlatov's renowned works The Suitcase and The Zone as his most personal and poignant portrayal of the Russian attitude towards life and art.

Sergei Dovlatov was born in Ufa, Bashkiria (U.S.S.R.), in 1941. He dropped out of the University of Leningrad after two years and was drafted into the army, serving as a guard in high–security prison camps. In 1965 he began to work as a journalist, first in Leningrad and then in Tallinn, Estonia. After a period of intense harassment by the authorities, he emigrated to the United States in 1978. He lived in New York until his death in 1990.

"Broke and divorced, Boris has taken a job as a tour–guide at the Pushkin Hills Preserve, where he immediately goes about hilariously ridiculing the visitors and staff who so revere Pushkin. Dovlatov's short novel begins as a comedy but, rife with pathos, progresses toward a moving final act." —Publisher's Weekly, a Best Book of 2014

"This is a most satisfying read that sustains its humor and emotional resonance." —Publisher's Weekly

"The descent of the drunkard in Pushkin Hills, from qualified hope to utter despair, is arguably one of Dovlatov's greatest contributions to Russian literature." —New York Review of Books

"The preserve in "Pushkin Hills" works as kind of a microcosm of Russian life and politics – in which one's dedication to love of country is constantly being tested. Dovlatov recognizes that this sense of surreal political paranoia does have a humorous element..." —Christian Science Monitor

"Narrated in the first person, Alikhanov's hilarious observations of the community and people around him ("He was too lazy to put on a hat. He simply laid it on top of his head"), his alcoholic misadventures, and especially his ridicule of the Pushkin Hills Preserve tourists propel this comic but trenchant story. . .A most satisfying read that sustains its humor and emotional resonance."—Publishers Weekly

"A black comedy of eyes–wide–open excess [...] and a fine rumination on being Russian, besides." —Kirkus Reviews

"This is a most satisfying read that sustains its humor and emotional resonance." —Publisher's Weekly