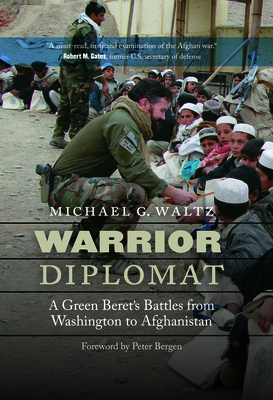 Grappling with centuries-old feuds, defeating a shrewd insurgency, and navigating the sometimes paralyzing bureaucracy of the U.S. military are issues that prompt sleepless nights for both policy makers in Washington DC and soldiers at war, albeit for different reasons. Few, however, have dealt with these issues in the White House situation room and on the front line. Michael G. Waltz has done just that, working as a policy advisor to Vice President Richard B. Cheney and also serving in the mountains of Afghanistan as a Green Beret, directly implementing strategy in the field that he helped devise in Washington.

In Warrior Diplomat: A Green Beret’s Battles from Washington to Afghanistan, Waltz shares his unique firsthand experiences, revealing the sights, sounds, emotions, and complexities involved in the war in Afghanistan. Waltz also highlights the policy issues that have plagued the war effort throughout the past decade, from the drug trade, to civilian casualties, to a lack of resources in comparison to Iraq, to the overall coalition strategy. At the same time, he points out that stabilizing Afghanistan and the region remains crucial to national security and that a long-term commitment along the lines of South Korea or Germany is imperative if America is to remain secure.

MICHAEL G. WALTZ is a lieutenant colonel in the Special Forces (reserve component), president of Metis Solutions, and senior national security fellow at the New America Foundation. Formerly, he was commander of a Special Forces company, counterterrorism advisor to the vice president, and director for Afghanistan policy, Office of the Secretary of Defense–Policy.

PETER BERGEN is the author of four books about Osama bin Laden and al Qaeda, including, most recently, Manhunt: The Ten-Year Search for bin Laden from 9/11 to Abbottabad.

"Waltz, a lieutenant colonel in the Army reserves, commanded a Special Forces company in Afghanistan and held high counterterrorism positions at the Pentagon and White House. Combining what he saw on the ground with what he gleaned in Washington, Waltz offers his thoughts on the U.S. military and government’s management of the fight against the Taliban in Afghanistan. . . . Waltz succeeds in his goal of explaining how the war in Afghanistan has been executed, making a case that the continuing chaos that nation endures is "directly connected" to the U.S. national interest."—Publishers Weekly

"Warrior Diplomat [is] a memoir of unique insight into the hope and tragedy of America’s war in Afghanistan. . . . There is an almost surreal quality in the memoir of a man who briefed and wrote policy proposals for the powerful Vice-President one month, and in the next, shared meals with Afghan farmers or scrambled over walls in the dark of night to grab a Taliban commander, visiting relatives. . . . A must read book to understand how America’s war in Afghanistan was fought so hard, for so long to so few measurable results."—Mark Safranski, Pragati

"Few people in Washington must execute the policies they help craft. Warrior Diplomat is a must-read, firsthand examination of the Afghan war through the experiences of a practitioner at both ends of the spear."—Robert M. Gates, former U.S. secretary of defense

"Michael Waltz distills the hard-earned wisdom of more than a decade of deep involvement in America’s Afghan campaign. Unlike most other participants, however, Waltz served as a Special Forces officer on the ground and as a senior policy maker in Washington. One can only wish that more of our decision-makers possessed his breadth of vision and experience."—Nathaniel C. Fick, author of One Bullet Away

"Using his singular set of experiences as a U.S. Army Special Forces operator and Washington policy insider, Mike Waltz captures the policy ambivalences, implementation challenges, and individual heroics that have made the U.S. effort in Afghanistan such a conundrum for presidents, generals, and the American people. But Waltz never loses sight of the human side of the equation and never gives in to defeatism or fatalism. His wise advice for the future should be heeded by U.S. leaders, now and in the future."—David Sedney, former deputy assistant secretary of defense for Afghanistan, Pakistan, and Central Asia

"Warrior Diplomat is an important book that provides an unparalleled, firsthand account of America's role in Afghanistan. Michael Waltz brings us into the inner sanctums of the White House and the Pentagon, where the war was being planned and debated, and then leads us onto the battlefields of Afghanistan."—Seth G. Jones, author of In the Graveyard of Empires: America's War in Afghanistan

"Mike Waltz's important new book deftly charts 'what might have been' over the course of a long, largely indecisive war. NATO's largely unseen failures in Afghanistan are perhaps better charted here than in any other recent account—and it is a story that needs to be told as we think about future coalition operations. Mike stitches together the long thirteen-year arc of this story as few others could, from front line to the conference tables of policy makers in Washington and Europe. This is a book that needs to be read to understand what really happened over the last decade-plus in Afghanistan—and why."—Lieutenant General (Ret.) Dave Barno, former commander, Combined Forces Command in Afghanistan