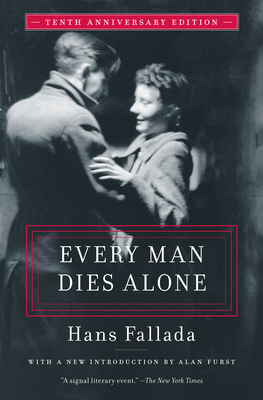 “This is a tale written by a madman, about madmen and common folk in a time of terror, in a place of fear--and about those who resist their oppressors because in such situations someone must. Based on a true story, this bestseller from the '40s has, to our good fortune, resurfaced to take its rightful place beside The Reader and All Quiet on the Western Front as yet another great anti-war novel by a brilliant German author.”
— Bob Sommer, Changing Hands Bookstore, Tempe, AZ

This never-before-translated masterpiece—by a heroic best-selling writer who saw his life crumble when he wouldn’t join the Nazi Party—is based on a true story.

It presents a richly detailed portrait of life in Berlin under the Nazis and tells the sweeping saga of one working-class couple who decides to take a stand when their only son is killed at the front. With nothing but their grief and each other against the awesome power of the Reich, they launch a simple, clandestine resistance campaign that soon has an enraged Gestapo on their trail, and a world of terrified neighbors and cynical snitches ready to turn them in.

In the end, it’s more than an edge-of-your-seat thriller, more than a moving romance, even more than literature of the highest order—it’s a deeply stirring story of two people standing up for what’s right, and for each other.

Before WWII , German writer Hans Fallada’s novels were international bestsellers, on a par with those of his countrymen Thomas Mann and Herman Hesse. In America, Hollywood even turned his first big novel, Little Man, What Now? into a major motion picture.

Learning the movie was made by a Jewish producer, however, Hitler decreed Fallada’s work could no longer be sold outside Germany, and the rising Nazis began to pay him closer attention. When he refused to join the Nazi party he was arrested by the Gestapo—who eventually released him, but thereafter regularly summoned him for “discussions” of his work.

However, unlike Mann, Hesse, and others, Fallada refused to flee to safety, even when his British publisher, George Putnam, sent a private boat to rescue him. The pressure took its toll on Fallada, and he resorted increasingly to drugs and alcohol for relief. After Goebbels ordered him to write an anti-Semitic novel, he snapped and found himself imprisoned in an asylum for the “criminally insane”—considered a death sentence under Nazi rule. To forestall the inevitable, he pretended to write the assignment for Goebbels, while actually composing
three encrypted books—including his tour de force novel The Drinker—in such dense code that they were not deciphered until long after his death.

Fallada outlasted the Reich and was freed at war’s end. But he was a shattered man. To help him recover by putting him to work, Fallada’s publisher gave him the Gestapo file of a simple, working-class couple who had resisted the Nazis. Inspired, Fallada completed Every Man Dies Alone in just twenty-four days.

He died in February 1947, just weeks before the book’s publication.

"The greatest book ever written about German resistance to the Nazis."
--Primo Levi

"Hans Fallada's Every Man Dies Alone is one of the most extraordinary and compelling novels ever written about World War II. Ever. Fallada lived through the Nazi hell, so every word rings true–this is who they really were: the Gestapo monsters, the petty informers, the few who dared to resist. Please, do not miss this."
--Alan Furst

"A signal literary event of 2009 has occurred. Rescued from the grave, from decades of forgetting, [Every Man Dies Alone] testifies to the lasting value of an intact, if battered, conscience. In a publishing hat trick, Melville House allows English-language readers to sample Fallada's vetiginous variety [and] the keen vision of a troubled man in troubled times, with more breadth, detail, and understanding than most other chroniclers of the era have delivered. To read Every Man Dies Alone, Fallada's testament to the darkest years of the 20th century, is to be accompanied by a wise, somber ghost who grips your arm and whispers in your ear: 'This is how it was. This is what happened.'"
-- New York Times Book Review

"Every Man Dies Alone...deserves a place among the 20th century's best novels of political witness."
--Sam Munson, The National

"Every Man Dies Alone [is] one of the most immediate and authentic fictional accounts of life during the long nightmare of Nazi rule."
--The New York Observer

"Primo Levi…called this "the greatest book ever written about the German resistance to the Nazis." It is, in retrospect, an understatement. This is a novel that is so powerful, so intense, that it almost hums with electricity."
--Minneapolis Star-Tribune

" [Every Man Dies Alone] has the suspense of a John le Carré novel, and offers a visceral, chilling portrait of the distrust that permeated everyday German life during the war."
--The New Yorker

"[A]t once a riveting page turner and a memorable portrait of wartime Berlin...With its vivid cast of characters and pervasive sense of menace, Every Man Dies Alone is an exciting book."
—John Powers for Fresh Air / NPR Books We Like

"...necessary and gripping."
—The Oregonian