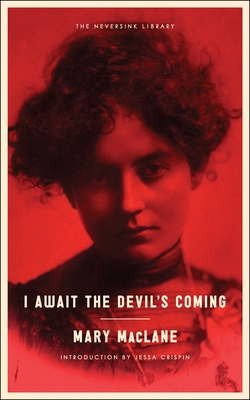 By Mary MacLane, Jessa Crispin (Introduction by)
$16.00
This book is out of stock indefinitely, unable to order at this time.

A confessional memoir written by a depressed 19-year-old girl in Butte, Montana who wants to marry the Devil. Oh, and it's 1902.

I am awestruck by the sheer force of this woman's voice. It could send a person running barefoot over the plains, howling at the "red line of the horizon." Remember what it was like to feel this kind of passion? No? This is your book.

"I was born in 1881 at Winnepeg (sic), in Canada. Whether Winnepeg will yet live to be proud of this fact is a matter for some conjecture and anxiety on my part." At nineteen, avowed Satanist and would-be libertine MacLane was already too voracious for her childhood environs; the "devil's workshop" of her journals forms a phrase-for-phrase indelible retort to this indifferent landscape and a timely social circumscription both. Precocious, quotable, sometimes wonderfully quaint: a book of escapist prayers for prairie queers.

It's 1903 in Butte, Montana, and Mary MacLane is a genius, avowed Satanist, and a would-be libertine, if only she could get out of the prairie, which she hates, but she loves, the world is too small for her, she is enormous, she feels everything, my God. Cam once described this book as "a book of escapist prayers for prairie queers," and he had it exactly right. It's a book for anyone who's ever felt too much and too vast and too brilliant, stuck in a lonely place.

Mary MacLane’s I Await the Devil’s Coming is a shocking, brave and intellectually challenging diary of a 19-year-old girl living in Butte, Montana in 1902. Written in potent, raw prose that propelled the author to celebrity upon publication, the book has become almost completely forgotten.

In the early 20th century, MacLane’s name was synonymous with sexuality; she is widely hailed as being one of the earliest American feminist authors, and critics at the time praised her work for its daringly open and confessional style. In its first month of publication, the book sold 100,000 copies — a remarkable number for a debut author, and one that illustrates MacLane’s broad appeal.

Now, with a new foreward written by critic Jessa Crispin, I Await The Devil’s Coming stands poised to renew its reputation as one of America’s earliest and most powerful accounts of feminist thought and creativity.

MARY MACLANE was born on May 1st 1881 in Winnipeg, Manitoba, Canada. Her family moved to Minnesota while she was young, then again to Montana after the death of her father and remarriage of her mother. She began writing for her school paper in 1898 and published her first book, I Await the Devil's Coming, under the title The Story of Mary MacLane, in 1902 at the age of nineteen. She published two further books, including the memoir I, Mary MacLane in 1917; also in 1917 she wrote and starred in an autobiographical silent film, Men Who Have Made Love to Me. She died in mysterious circumstances in Chicago in 1929, at the age of 48, and her works fell almost immediately into obscurity.

“MacLane deserves canonization alongside Virginia Woolf and Emily Dickinson and Gertrude Stein.” —Emily Gould, author of And The Heart Says Whatever and Friendship

"One of the most fascinatingly self-involved personalities of the 20th century."  —The Age (2011)

"Mary MacLane comes off the page quivering with life. Moving."  —The London Times

"Her first book was the first of the confessional diaries ever written in this country, and it was a sensation."  —The New York Times

“I know of no other writer who can play upon words so magically. Mary MacLane is one of the few who actually knows how to write English. She senses the infinite resilience, the drunken exuber- ance, the magnificent power & delicacy of the language.” —H.L. Mencken

“A pioneering newswoman and later a silent-screen star, consid- ered the veritable spirit of the iconoclastic Twenties.” —Boston Globe

“A milestone… Heartwarming, sensual and candid, I Await the Devil's Coming offers reflections that likely were quite scandalous in their time and remain evocative and powerful today." —California Bookwatch

“She was an extraordinarily gifted girl. . . She had a natural gift for crisp and concise expression, a keen, undisciplined intelligence and the emotional sensibility of a true artist.” —New York Tribune