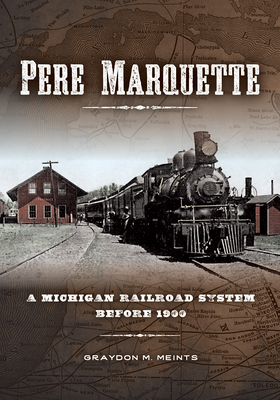 By Graydon M. Meints
$44.95
Not On Our Shelves - Available to Order

The Pere Marquette Railroad has not one but two histories—one for the twentieth century and one for the nineteenth. While the twentieth-century record of the Pere Marquette Railroad has been well studied and preserved, the nineteenth century has not been so well served. This volume aims to correct that oversight by focusing on the nineteenth-century part of the company’s past, including the men who formed and directed these early roads, and the development of the system. The Pere Marquette Railroad was formed in 1900 by a merger of three Michigan railroad companies and lasted forty-seven years, disappearing in June 1947 by merger into the maw of the Chesapeake & Ohio Railroad. Prior to the 1900 merger, the Pere Marquette Railroad’s predecessors made up a motley collection of disconnected and unaffiliated short, local rail lines. After the financial panic of 1893, and with some commonality of ownership, the companies worked together more closely. Before the end of the decade, the three main railroads—the Flint & Pere Marquette; the Detroit, Lansing & Northern; and the Chicago & West Michigan—had decided that the only way to maintain solvency was to merge. Using a plethora of primary sources including railway timetables and maps, this work lends insight into the little-known corporate business history of the Pere Marquette Railroad.

“Graydon M. Meints, the master compiler of Michigan railroad corporate histories, has again brought order from chaos. In this concise book he provides an invaluable guide to the confusing myriad of companies, many of them small lumbering lines, that were consolidated in stages to form the Pere Marquette Railroad. This helpful resource includes short histories of those companies and the people who built them.”
—PAUL TRAP, independent railroad researcher, lecturer, and writer