Bunker Hill: A City, a Siege, a Revolution (CD-Audio) 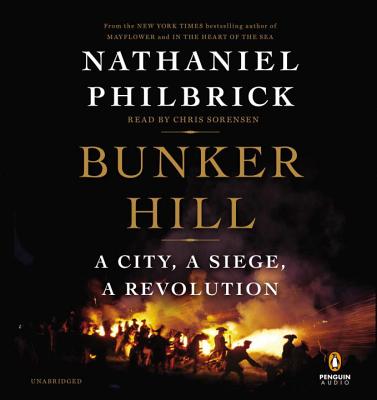 By Nathaniel Philbrick, Chris Sorensen (Read by)
$39.95
This book is out of stock indefinitely, unable to order at this time.

Nathaniel Philbrick, the bestselling author of In the Heart of the Sea and Mayflower, brings his prodigious talents to the story of the Boston battle that ignited the American Revolution.

Boston in 1775 is an island city occupied by British troops after a series of incendiary incidents by patriots who range from sober citizens to thuggish vigilantes. After the Boston Tea Party, British and American soldiers and Massachusetts residents  have warily maneuvered around each other until April 19, when violence finally erupts at Lexington and Concord.  In June, however, with the city cut off from supplies by a British blockade and Patriot militia poised in siege, skirmishes give way to outright war in the Battle of Bunker Hill. It would be the bloodiest battle of the Revolution to come, and the point of no return for the rebellious colonists.

Philbrick brings a fresh perspective to every aspect of the story. He finds new characters, and new facets to familiar ones. The real work of choreographing rebellion falls to a thirty-three year old physician named Joseph Warren who emerges as the on-the-ground leader of the Patriot cause and is fated to die at Bunker Hill. Others in the cast include Paul Revere, Warren’s fiancé the poet Mercy Scollay, a newly recruited George Washington, the reluctant British combatant General Thomas Gage and his more bellicose successor William Howe, who leads the three charges at Bunker Hill and presides over the claustrophobic cauldron of a city under siege as both sides play a nervy game of brinkmanship for control.

With passion and insight, Philbrick reconstructs the revolutionary landscape—geographic and ideological—in a mesmerizing narrative of the robust, messy, blisteringly real origins of America.

Nathaniel Philbrick grew up in Pittsburgh, Pennsylvania, and earned a BA in English from Brown University and an MA in America Literature from Duke University, where he was a James B. Duke Fellow. He was Brown University’s first Intercollegiate All-American sailor in 1978, the same year he won the Sunfish North Americans in Barrington, RI. After working as an editor at Sailing World magazine, he wrote and edited several books about sailing, including The Passionate Sailor, Second Wind, and Yaahting: A Parody.

In 1986, Philbrick moved to Nantucket with his wife Melissa and their two children. In 1994, he published his first book about the island’s history, Away Off Shore, followed by a study of the Nantucket’s native legacy, Abram’s Eyes. He was the founding director of Nantucket’s Egan Maritime Institute and is still a research fellow at the Nantucket Historical Association.

In 2000, Philbrick published the New York Times bestseller In the Heart of the Sea, which won the National Book Award for nonfiction. The book is the basis of the forthcoming Warner Bros. motion picture “Heart of the Sea,” directed by Ron Howard and starring Chris Hemsworth, Cillian Murphy, Brendan Gleeson, Benjamin Walker, Ben Wishaw, and Tom Holland, which is scheduled for release in March, 2015. The book also inspired a 2001 Dateline special on NBC as well as the 2010 two-hour PBS American Experience film “Into the Deep” by Ric Burns.

His next book was Sea of Glory, published in 2003, which won the Theodore and Franklin D. Roosevelt Naval History Prize and the Albion-Monroe Award from the National Maritime Historical Society. The New York Times Bestseller Mayflower was a finalist for both the 2007 Pulitzer Prize in History and the Los Angeles Times Book Award, won the Massachusetts Book Award for nonfiction, and was named one the ten Best Books of 2006 by the New York Times Book Review. Mayflower is currently in development as a limited series on FX.

In 2010, he published the New York Times bestseller The Last Stand, which was named a New York Times Notable book, a 2010 Montana Book Award Honor Book, and a 2011 ALA Notable Book. Philbrick was an on-camera consultant to the two-hour PBS American Experience film “Custer’s Last Stand” by Stephen Ives. The book is currently being adapted for a ten-hour, multi-part television series. The audio book for Philbrick’s Why Read Moby-Dick? (2011) made the ALA's Listen List in 2012 and was a finalist for the New England Society Book Award.

Philbrick’s latest New York Times bestseller, Bunker Hill:  A City, a Siege, a Revolution, was published in 2013 and was awarded both the 2013 New England Book Award for Non-Fiction and the 2014 New England Society Book Award. Bunker Hill won the 2014 book award from the Society of Colonial Wars, and has been optioned by Warner Bros. for feature film adaptation with Ben Affleck attached to direct.

Philbrick’s writing has appeared in Vanity Fair, the New York Times Book Review, the Wall Street Journal, the Los Angeles Times, and the Boston Globe. He has appeared on the Today Show, the Morning Show, Dateline, PBS’s American Experience, C-SPAN, and NPR. He and his wife still live on Nantucket.