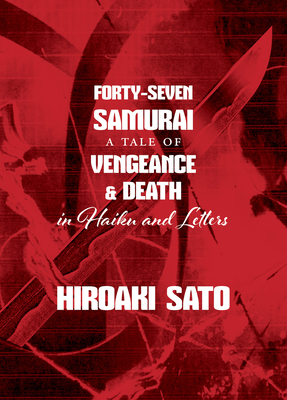 By Hiroaki Sato
$19.95
Not On Our Shelves - Available to Order

A remarkable and true tale of loyalty, vengeance, and ritual suicide. . . . In the spring of 1701, the regional lord Asano Naganori wounded his supervising official, Kira Yoshinaka, during an important ceremony in the ruling shogunate's Edo Castle and was at once condemned to death. Within two years, in the dead of winter, a band of forty-seven of Asano's retainers avenged him by breaking into Yoshinaka's mansion and killing him. Subsequently, all the men were sentenced to death but allowed to perform it honorably by seppuku.

This incident--often called the Ako Incident--became a symbol of samurai honor andat once prompted stage dramatization in kabuki and puppet theater. It has since has been told and retold in short and long stories, movies, TV dramas. The story has also attracted the attention of foreign writers and translators. The most recent retelling was the 2013 Hollywood film 47 Ronin, with Keanu Reeves, though it was wildly and willfully distorted.

What did actually happen and how has this famous vendetta resonated through history? Hiroaki Sato's examination is a close, comprehensive look at the Ako Incident through the context of its times, portraits of the main protagonists, and its literary legacy in the haiku ofthe avengers. Also included is Sato's new translation of Akutagawa Ryunosuke's short story about leader Oishi Kuranosuke as he awaited sentencing.

Hiroaki Sato is a prolific, award-winning writer of books on Japanese history and literature, and a translator of classical and modern Japanese poetry into English. American poet Gary Snyder has called Sato "perhaps the finest translator of contemporary Japanese poetry into American English." He is the author of the classic works Legends of the Samurai. and The Sword and the Mind His reviews and articles have appeared in The Philadelphia Inquirer, The New York Times Book Review, AsiaWeek, Mainichi Daily News, St. Andrews Review, Journal of the Association of Teachers of Japanese, The Journal of American and Canadian Studies, Comparative Literature Studies, The Japan Times, The Harvard Journal of Asiatic Studies, The Journal of Japanese Studies, Modern Haiku, Japan Focus, and others. He recently received the 2017-2018 Japan-U.S. Friendship Commission Translation Prize for Silver Spoon (Stone Bridge Press).