Street Smart: The Rise of Cities and the Fall of Cars (Hardcover) 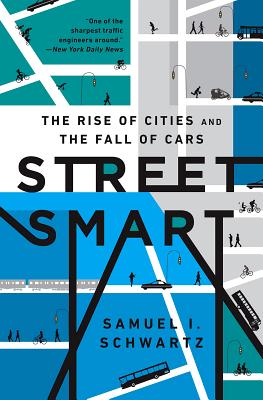 On a Saturday morning in December 1973, a section of New York's West Side Highway collapsed under the weight of a truck full of asphalt. The road was closed, seemingly for good, and the 80,000 cars that traveled it each day had to find a new way to their destinations. It ought to have produced traffic chaos, but it didn't. The cars simply vanished. It was a moment of revelation: the highway had induced the demand for car travel. It was a classic case of "build it and they will come," but for the first time the opposite had been shown to be true: knock it down and they will go away. Samuel I. Schwartz was inspired by the lesson. He started to reimagine cities, most of all his beloved New York, freed from their obligation to cars. Eventually, he found, he was not alone.

Since the turn of the twenty-first century, a surreptitious revolution has taken place: every year Americans are driving fewer miles. And the generation named for this new century -- the Millennials -- are driving least of all. Not because they can't afford to; they don't want to. They have better ideas for how to use their streets. An urban transformation is underway, and smart streets are at the heart of it. They will boost property prices and personal fitness, roll back years of congestion and smog, and offer a transformative experience of American urban life. From San Francisco to Salt Lake, Charleston to Houston, the American city is becoming a better and better place to be. Schwartz's Street Smart is a dazzling and affectionate history of the struggle for control of American cities, and an inspiring off-road map to a more vibrant, active, and vigorous urban future.

William Rosen is a former editor and publisher at Macmillan, Simon & Schuster, and The Free Press. He has contributed to the Wall Street Journal, the American Interest, Lapham's Quarterly, the New Atlantic, the Washington Post Book World, Bloomberg, and Smithsonian's Echoes, and is the author of Justinian's Flea: The First Great Plague and the End of the Roman Empire (Viking), The Most Powerful Idea in the World: A Story of Steam, Industry, and Invention (Random House) and The Third Horseman: Climate Change and the Great Famine of the 14th Century (Viking).

“Equal parts transportation-planning compendium, autobiography and love letter to New York City, Street Smart lays out Sam Schwartz's vision for the future of multimodal and multinodal transportation systems…. Touching on everything from the rise of the automobile and the decline and resurrection of streetcars to traffic calming, ride-sharing and the advent of driverless cars, Schwartz combines an engineer's precise logic with broader societal and cultural considerations—and plenty of wry Brooklyn humor—to provide an engaging examination of once and future urban transportation trends.” —Engineering News-Record

“Nobody is more qualified to write a book about transportation than Schwartz.” —City Journal

“An engaging trip down memory lane, where trolleys and pedestrians and bicycles intersect and collide with cars in what Schwartz calls ‘an accident of history,' replete with a promising path toward a multi-modal urban revival.” —MoveNY

"Schwartz sees the writing on the asphalt, even if the federal government, intent on building ever more highways, does not. The future isn't on four wheels. If you want your area to attract young people, entrepreneurs, and capital, you have to make it walkable." —Downtown Express

“Street Smart doesn't read as if you were stuck on the Cross-Bronx Expressway ('the most congested corridor in the entire country,' [Scwartz] writes). Rather, it's mostly accessible, discerning and even revealing.” —Sam Roberts, New York Times

“A snappy read…[Schwartz's] account of President Eisenhower's creation of the interstate highway system is riveting, as is his informed discussion of the rise and fall of streetcars.” —Wall Street Journal

“Schwartz…chronicles in Street Smart the history of urban transportation in the U.S. (growing up in Brooklyn, he has lived through a lot of it). … He takes a strong stand, in some cases calling upon personal experiences that streets belong to communities, not cars, and that sustainable transportation planning is helping to revitalize cities.” —Chicago Tribune