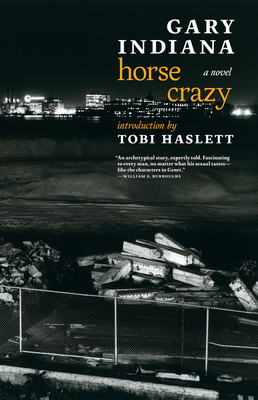 Using a familiar structure and plot, Horse Crazy chronicles a writer’s obsession with a younger, drug-addicted artist as he falls into a pit of longing and loneliness. He claims he won’t be swept away by “love”, yet his desperation is evident on every page. He’s often delusional, sometimes narcissistic, yet still oddly endearing. He desires desire, even when he knows he’s looking in the wrong places. In other words, it’s perfect for Sad Gay Winter.

One of the messiest, most humiliating relationships ever committed to paper. Horse Crazy features maybe my favorite villain (and victim?) in all of queer literature, and of course he just has to have a perfect ass. Gary Indiana is an absolute wizard at turning the worst life has to offer into the most delightfully bitchy gossip.

"This story, if it is one, deserves the closure of a suicide, perhaps even the magisterial finality of what is usually called a novel, but the remnants of that faraway time offer nothing more than a taste of damp ashes, a feeling of indeterminacy, and the obdurate inconclusiveness of passing time." So writes the unnamed narrator of Horse Crazy, looking back on a season of madness and desire. The first novel from the brilliant, protean Gary Indiana, Horse Crazy tells the story of a thirty-five-year-old writer for a New York arts and culture magazine whose life melts into a fever dream when he falls in love with the handsome, charming, possibly heroin-addicted, and almost certainly insane Gregory Burgess. In the derelict brownstones of the Lower East Side in the late eighties, among the coked out restauranteurs and art world impresarios of the supposed "downtown scene," the narrator wanders through the fog of passion. Meanwhile, the AIDS epidemic is spreading through the city, and New York friendships sputter to an end. Here is a novel where the only moral is that thwarted passion is the truest passion, where love is a hallucination and the gravest illness is desire.

Gary Indiana is a novelist and critic who has chronicled the despair and hysteria of America in the late twentieth century. From Horse Crazy (1989), a tale of feverish love set against the backdrop of downtown New York amid the AIDS epidemic, to Do Everything in the Dark (2003), "a desolate frieze of New York's aging bohemians" (n+1), Indiana's novels mix horror and bathos, grim social commentary with passages of tenderest, frailest desire. With 1997's Resentment: A Comedy, Indiana began his true crime trilogy, following up with Three Month Fever: The Andrew Cunanan Story (1999) and Depraved Indifference (2002). Together, the three novels show the most vicious crimes in our nation's history to be only American pathologies personified. In 2015, Indiana published his acclaimed anti-memoir, I Can Give You Anything But Love. Called one of "the most brilliant critics writing in America today" by the London Review of Books, "the punk poet and pillar of lower-Manhattan society" by Jamaica Kincaid, and "one of the most important chroniclers of the modern psyche" by the Guardian, Gary Indiana remains both inimitable and impossible to pin down.

“[A] superbly wrought novel . . . a portrait whose sincerity and depth makes it a well-polished gem.” —Publishers Weekly

“It is a wonderful book. It really is a wonderful, beautiful, funny, breathtaking book. If it isn’t, then I don’t are for books that are.” —Keith Ridgway, The Guardian

“A stunning chronicle of the sickness of love.” —New York Post

“Gary Indiana’s dark, wordy tale of sexual obsession captures the propulsive rhythms of its New York City setting—the frantic energy, the ongoing battle to remain in the vanguard of taste, the conversations that consist of self-involved rushes of words.” —Los Angeles Times

“Horse Crazy is a sad, insane journey of infatuation and love. Frustrating to the bitter end—where all that is left is truth.” —Tracey Emin

“An archetypical story, expertly told. Fascinating to every man, no matter what his sexual tastes—like the characters in Genet.” —William S. Burroughs

“Indiana’s debut novel is an ’80s East Village classic . . . The portrait of how HIV first affected NYC’s gay community is unforgettable. And the narrator’s failed love occasions fiery character analysis—of both the pursuer and the pursued.” —Michael Miller, TimeOut NY

“A hip, stream-of-consciousness novel written with poignancy and skill.” —Vogue

“A story of obsessive love, the kind of fixation in which the other person doesn’t love you back but strings you along, until you’re strung out on love.” —Newsday

"Both wise and aphrodiasic . . . captures the mood of a particular time and place—the East Village arts scene.” —The Washington Blade

"Horse Crazy follows an unnamed narrator. He is the most anxious voice in your head come to life. At one point, he spends like an hour walking between two intersections worried he's told Gregory (his younger, mysterious, heroin-addicted lover) the wrong meeting place. As he gets more and more wrapped up in Gregory's chaotic life, you really feel his desperation. By the end, he's nearly drowning in his (unreciprocated) love for Gregory and exhausting every lifeline his friends try to throw him. And then, Gregory is gone. This is an excruciating read." —Cody Stuart, bookseller at Book Culture