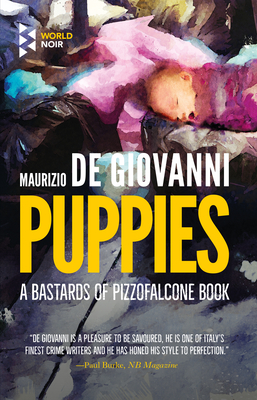 The next installment in Maurizio de Giovanni's bestselling "Bastards of Pizzofalcone" series unfolds during the crisp beginning of April in contemporary Naples as a new evil spreads throughout the city.

A baby is left abandoned beside a dumpster. A young Ukranian maid fights the torrents of greed and frustration with the world around her. Small animals begin to disappear off the streets. The task of solving these mysteries is entrusted to a team of policemen in which few believe: the Bastards of Pizzofalcone. Complete with stirrings in the city's criminal underbelly and a fight against a seemingly inhuman evil, this novel is sure to delight fans of de Giovanni's previous works.

De Giovanni is one of Europe's most renowned and versatile mystery writers. His award-winning and bestselling novels, all of which take place in Naples, engage readers in gripping tales of Europe's most fabled, atmospheric, dangerous, and lustful city.

Maurizio de Giovanni's Commissario Riccardi books are bestsellers across Europe, with sales of the series approaching 1 million copies. De Giovanni is also the author of the contemporary Neapolitan thriller, The Crocodile. He lives in Naples with his family.