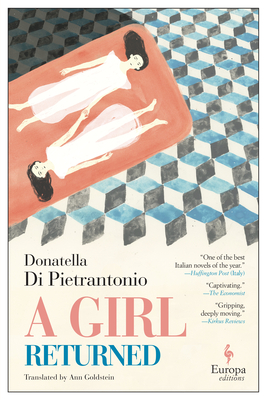 This dazzling little gem of a novel is as simple as it is disconcerting: an unnamed girl is sent to live with her birth family by the people she had been raised to think of as her parents. She struggles to find a sense of belonging in a radically different home, and in doing so comes to redefine her very identity. Told with awesome intensity, clarity, and delicacy, this is a moving exploration of the pain and beauty of growing up and becoming oneself outside, and sometimes in spite, of one’s family.

At a certain time of year, when the weather cools, I begin to crave a certain kind of book that I've come to describe as children's books for adults: a little dark, a little magical, but ultimately comforting. A Girl Returned is something like a fairytale in reverse: a thirteen year-old girl is taken from the seaside home of her elegant and wealthy adopted parents and returned to the chaotic household of her original birth family in a small Italian village. A cross between Jane Eyre and Elena Ferrante, this is a coming-of-age story to anyone who has felt like a stranger where they ought to belong.

WINNER OF THE CAMPIELLO PRIZE

LONGLISTED FOR THE 2020 TRANSLATED BOOK AWARDS

"I was the Arminuta, the girl returned. I spoke another language, I no longer knew who I belonged to. The word 'mama' stuck in my throat like a toad. And, nowadays, I really have no idea what kind of place mother is. It is not mine in the way one might have good health, a safe place, certainty."

Told with an immediacy and a rare expressive intensity that has earned it countless adoring readers and one of Italy's most prestigious literary prizes, A Girl Returned is a powerful novel rendered with sensitivity and verve by Ann Goldstein, translator of the works of Elena Ferrante. Set against the stark, beautiful landscape of Abruzzo in central Italy, this is a compelling story about mothers and daughters, about responsibility, siblings, and caregiving.

Without warning or explanation, an unnamed 13-year-old girl is sent away from the family she has always thought of as hers to live with her birth family: a large, chaotic assortment of individuals whom she has never met and who seem anything but welcoming. Thus begins a new life, one of struggle, tension, and conflict, especially between the young girl and her mother. But in her relationship with Adriana and Vincenzo, two of her newly acquired siblings, she will find the strength to start again and to build a new and enduring sense of self.

Donatella Di Pietrantonio lives in Penne where she practices as a pediatric dentist. From the age of nine she has been writing stories, fables, poems, and novels. My Mother Is a River is her first novel. It was first published in Italy in 2011, where it won the Tropea and the John Fante literary prizes, and was translated into German in 2013. Her second book, Bella Mia, was published in 2014 and won the Brancati Prize. Ann Goldstein is an editor at The New Yorker. Her translations for Europa Editions include novels by Amara Lakhous, Alessandro Piperno, and Elena Ferrante's bestselling My Brilliant Friend. She lives in New York.