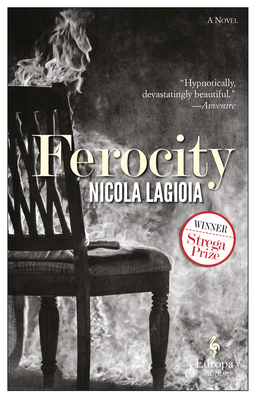 Winner of the 2015 Strega Prize, Italy's preeminent prize for fiction

Ferocity is at once an intimate family saga and a cinematic portrait of the moral and political corruption of an entire society. It is an ambitious, stylish work by one of Italy's foremost novelists.

Bari, southern Italy. On a stifling summer's night, on the outskirts of town, a young woman named Clara—the daughter of the region's most prominent family of real estate developers—stumbles naked, dazed, and bloodied down a major highway. Her death will be deemed a suicide. Her estranged half-brother, however, cannot free himself from her memory or the questions surrounding her death, and the more he learns about Clara's life, the more he reveals the moral decay at the core of his family's ascent to scoial prominence.

Ferocity combines suspense, psychological acutiy, and contemporary realism in a feat of storytelling. It is fierce and relentless in pursuit of its characters' psychological truths, yet lyrical and moving as it describes the natural splendor of Italy ravaged by greed and regulatory negligence.

Nicola Lagioia, born in Bari in 1973, is an editor for the Italian publisher Minimum Fax. He is the author of three novels and a collection of short stories. His books have been awarded the Strega Prize, the Premio Volponi, and the Premio Viareggio, among others. He lives in Rome. Ferocity is his English-language debut.

"A family wrecked by patriarchal stranglehold; a daughter who both defends and defies her father; and the deep rottenness of a society that bends low to power...make this work biting social commentary as well as edge-of-seat reading...A rich and readable cautionary tale for strong-minded readers."
—Library Journal, starred review

"This oblique kaleidoscopic approach allows the mystery to slowly and captivatingly resolve while offering a layered portrait of contemporary Italian life and the abuses of power that money can excuse."
—Publishers Weekly

“Complex, darkly absorbing and mysterious literary fiction [...] Lagioia’s prose—in Shugaar’s translation—depicts a family living far from the ease it projects; loyalties and betrayals painted in shades of gray; and a violently alive setting that plays off its characters.”
—Booklist

"A deeply satisfying read all its own...A page-turner, sure, but smart, smart, smart."
—Words Without Borders

“A work of startling energy and structural precision, an ambitious novel whose linguistic brilliance is frequently at odds with the twists and turns of Michele’s quest for the truth.”
—Financial Times

“[Ferocity] ticks all the boxes of a thriller while also being a masterfully written, baroque, many-faceted depiction of modern Italy.”
—The Spectator

"Ferocity is a portrait of a family tragedy, but also at its heart explores two competing visions of humanity: one ferocious and deterministic, the other transcendent and free-willed."
—The Guardian

"Lagioia writes vividly and conjures up an atmosphere of menace with great skill."
—The Mail on Sunday

"Lagioia brilliantly demonstrates the folly of his characters: rather than describing them from the outside, he constructs his narrative by oscillating unceasingly between past and future, premonition and regret."
—Emanuele Trevi, Corriere della Sera

"A story about family, about wealth, about Italians, about a humanity that is obscenely spent and confounded. A powerful, supremely well-crafted novel."
—Goffredo Fofi, Internazionale

"There's something Balzacian about Ferocity (and something that puts one in mind of Franzen's The Corrections). It digs beneath current events, inhabiting a zone that is more opaque and ambiguous than the nightly news."
—Paolo di Paolo, TuttoLibri

"This novel reminds one of the Greek tragedies and those ineluctable questions about the relationship between choice and destiny."
—Luca Illetterati, Alias