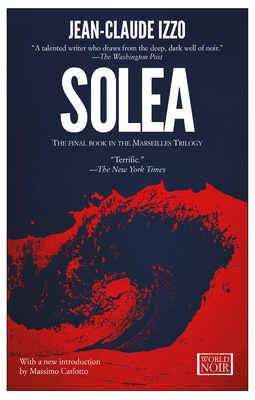 By Jean-Claude Izzo, Howard Curtis (Translated by)
$15.00
On Our Shelves

This is book number 3 in the Marseilles Trilogy series.

The Final Book in the Marseilles Trilogy

Ex-cop, loner, Fabio Montale returns in this stunning conclusion to Jean-Claude Izzo's Marseilles trilogy. Italian Mafiosi are hunting journalist-activist Babette Bellini, and the body count is growing as they close in on their prey. In desperation, Bellini seeks help from her former lover, Montale. Before he has time to shake off his most recent hangover, Montale is receiving sinister phone calls from men with Italian accents who want him to find Bellini for them. Like a woman he can't leave, like strong liquor he can't refuse, Marseilles lures Montale back into its violent embrace.

This is a Marseilles that will break your heart. A modern city and an ancient Mediterranean port, a melting pot of ethnicities and a cauldron boiling with human passions, a place of natural splendor and of sudden violence.

Solea is Izzo's heartfelt cry against the criminal forces corrupting his beloved city. It is his farewell to Marseilles and to its ideal protagonist, Fabio Montale. It concludes an unforgettable trilogy that epitomizes the aspirations and ideals of the Mediterranean noir movement.

Jean-Claude Izzo was born in Marseilles in 1945. Best known for the Marseilles trilogy (Total Chaos, Chourmo, Solea), Izzo is also the author of The Lost Sailors, and A Sun for the Dying. Izzo is widely credited with being the founder of the modern Mediterranean noir movement. He died in 2000 at the age of firty-five.


“One of the masterpieces of modern noir.”
—Michael Dirda, Washington Post

"Izzo's ability to describe Marseilles and to make his readers feel the multiracial reality of that city so directly and authentically is fascinating."
—Andrea Camilleri, author of the bestselling Inspector Montalbano series

"A talented writer who draws from the deep, dark well of noir."
—Washington Post

"A sensationally readable mystery...Full of fascinating characters."
—The Chicago Tribune

“Like the best noir writers—and make no mistake, he is among the best — Izzo not only has a keen eye for detail . . . but also digs deep into what makes men weep.”
—Time Out New York