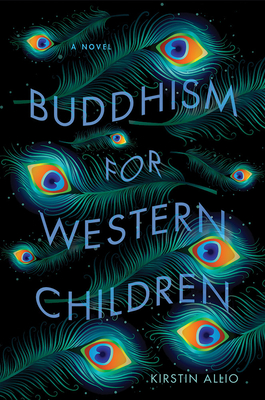 By Kirstin Allio
$17.00
On Our Shelves Now - Available to Ship to Your Home

Set on the coast of Maine and in the high desert of New Mexico in the late 1970s through the early 80s, Buddhism for Western Children is a universal and timeless story of a boy who must escape subjugation, tell his story, and reclaim his soul.

In search of community and transcendence, ten-year-old Daniel’s family is swept into the thrall of a potent and manipulative guru. To his followers, Avadhoot Master King Ivanovich is a living god, a charismatic leader who may reveal enlightenment as he mesmerizes, and alchemizes, Eastern and Western spiritual traditions.

Daniel’s family plunges into a world with different rules and rhythms—and with no apparent exit. They join other devotees in shunning the outside world, and fall under the absolutist authority of the guru and his lieutenants. Daniel bears witness to the relentless competition for the guru’s favor, even as he begins to recognize the perversion of his spirituality. Soon, Daniel himself is chosen to play a role. As tensions simmer and roil, darkness intrudes. Devotees overstep, placing even the children in jeopardy. Daniel struggles with conflicting desires to resist and to belong, until finally he must decide who to save and who to abandon.

With spiraling, spellbinding language, Allio reveals a cast of vivid, often darkly funny characters, and propels us toward a shocking climax where Daniel’s story cracks open like a kaleidoscope, revealing the costs of submitting to a tyrant and the shimmering resilience of the human spirit.

Kirstin Allio is the author of Clothed, Female Figure and Garner, which was a finalist for the LA Times Book Prize for first fiction. Her honors include the National Book Foundation’s 5 Under 35 Award and a PEN/O. Henry Prize. She lives in Providence, Rhode Island.

“Buddhism for Western Children is insane. It’s a weird, fun, and horrifying dream. Allio’s sentences are stunning (e.g. Concerning the air: “It’s so fresh it seems carbonated.”) and the end is home to the best plot twist of 2018. I said it. Read the book and tell me I'm wrong.”—NewPages
— NewPages