Indigo: In Search of the Color That Seduced the World (Hardcover) 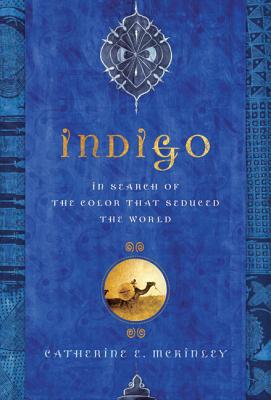 By Catherine E. McKinley
Unavailable, our apologies.
Out of Print

For almost five millennia, in every culture and in every major religion, indigo-a blue pigment obtained from the small green leaf of a parasitic shrub through a complex process that even scientists still regard as mysterious-has been at the center of turbulent human encounters.

Indigo is the story of this precious dye and its ancient heritage: its relationship to slavery as the "hidden half" of the transatlantic slave trade, its profound influence on fashion, and its spiritual significance, which is little recognized but no less alive today. It is an untold story, brimming with rich, electrifying tales of those who shaped the course of colonial history and a world economy.

But Indigo is also the story of a personal quest: Catherine McKinley is the descendant of a clan of Scots who wore indigo tartan as their virile armor; the kin of several generations of Jewish "rag traders"; the maternal granddaughter of a Massachusetts textile factory owner; and the paternal granddaughter of African slaves-her ancestors were traded along the same Saharan routes as indigo, where a length of blue cotton could purchase human life. McKinley's journey in search of beauty and her own history ultimately leads her to a new and satisfying path, to finally "taste life." With its four-color photo insert and sumptuous design, Indigo will be as irresistible to look at as it is to read.

Catherine McKinley is the author of The Book of Sarahs. She is a graduate of Sarah Lawrence College, where she has taught Creative Nonfiction, and a former Fulbright Scholar in Ghana, West Africa, where she began her research on indigo. She lives in New York City.

“[McKinley] introduces the reader to a wide cast of characters who slip in and out of the narrative unobtrusively.” —Kirkus Reviews

“The sections in which [McKinley] focuses on the history of indigo are fascinating, and some of her vivid descriptions shimmer with an almost cinematic quality.” —Ingrid Levin, Library Journal

“Call it blue gold, the devil's dye, or the cloth of history; indigo is the color that launched the ships and caravans of worldwide commerce. It encompasses the slave trade, the factories of European industry, and the woman-dominated markets of Africa. It binds the blue sails of Columbus's ships to denim jeans and the exquisite hand-woven fabrics collectors crave. Catherine McKinley follows her passion, her ‘insatiable, desire' for this beauty and history to Africa. There she enters a complex world--ancient, post-modern, stable and volatile. It demands that she be student, adventurer, aesthete and journalist: she meets these demands with restless intelligence, scrupulous honesty, a love of paradox and a generous exuberance. Indigo haunted her; now it will haunt you.” —Margo Jefferson, author of On Michael Jackson

“A charming book: ethereal, wise, personal, as well as an imaginative exploration of what this color really might be, when you go under the surface of its just being about blue.” —Victoria Finlay, author of Color: A Natural History of the Palette

“Indigo is a journey in every sense of the word, and one undertaken with an engaging passion. It is also, in the words of Miles Davis, Kind of Blue.” —Mark Kurlansky, author of Salt

“Catherine McKinley's Indigo is a moving and lyrical journey through several continents and through the writer's own internal landscapes. This beautiful and unforgettable book, like indigo itself, reaches deeply into all our lives.” —Edwidge Danticat, author of Brother, I'm Dying