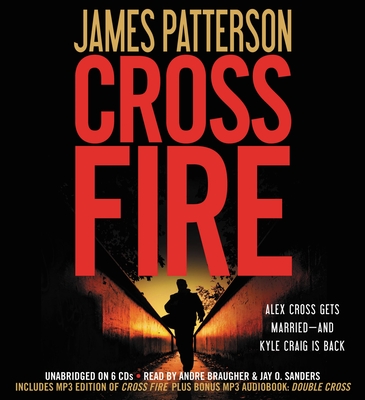 By James Patterson, Andre Braugher (Read by), Jay O. Sanders (Read by)
Unavailable, our apologies.
Out of Print

This is book number 16 in the Alex Cross series.

Detective Alex Cross and Bree's wedding plans are put on hold when Alex is called to the scene of the perfectly executed assassination of two of Washington D.C.'s most corrupt: a dirty congressmen and a scheming lobbyist. Next, the elusive marksman begins picking off other crooked politicians, sparking a blaze of theories--is the marksman a hero or a vigilante?

The case explodes and FBI agent Max Siegel battles Alex for jurisdiction. As Alex struggles with the sniper, Siegel, and the wedding, he receives a call from his deadliest adversary, Kyle Craig. The Mastermind is in D.C. and will not relent until he has eliminated Cross--and his family--for good. With a supercharged blend of suspense, action, and deception, CROSS FIREis James Patterson's most exciting Alex Cross novel ever.

"[Patterson's] books don't pussyfoot around when it comes to the villains. These are bad, bad people... [I, Alex Cross] is political, with a lot of intrigue in high places."—Al Roker, The Today Show

"I truly believe that James Patterson has an IV hooked up to his writing arm and Great Ideas, Great Plots, and Great Characters dribble constantly into his bloodstream...I, Alex Cross stuns."—TheReviewBroads.com

"The stakes are higher than ever before...More than a crime thriller, it's an absorbing family drama."—NightsandWeekends.com