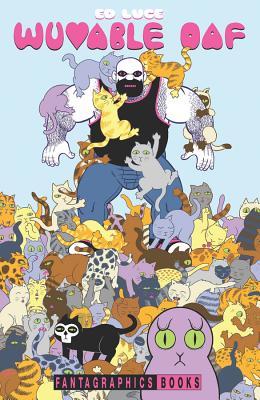 Oaf loves metal and kitties and is indeed as wuvable as the title suggests. He lives in a queer universe of wailing guitars and kinked-out sex. When he isn't caring for his kittens or remembering his Worst Dates Ever he's using his body hair to stuff his own brand of plush toys. The story is beefy, hilarious, brutal, and stuffed with references (Morissey, Black Flag, The Craft). Peek at the character guide in the back if you want a taste of what's to come.

This is the first-ever collection of the acclaimed self-published comic book series; it's about a big, hairy, gay ex-wrestler's search for love in the big city, set against the backdrop of San Francisco's queer and music scenes.

Wuvable Oaf is the first-ever collection of the acclaimed self-published comic book series by cartoonist Ed Luce. Oaf is a large, hirsute, scary-looking ex-wrestler who lives in San Francisco with his adorable kitties and listens to a lot of Morrissey. The book follows Oaf ’s search for love in the big city, especially his pursuit of Eiffel, the lead singer of the black metal/queercore/ progressive disco grindcore band Ejaculoid. Luce weaves between the friends, associates, enemies, ex-lovers and pasts of both men into the story of their courtship. A romantic comedy at its core, Wuvable Oaf recalls elements of comics as diverse as Scott Pilgrim, Love and Rockets, and Archie, set against the background of San Francisco’s queer community and music scene.

Ed Luce (pronounced “loose,” like the opposite of tight) has made a huge splash in the comics scene with his self-published comic book series. Wuvable Oaf has garnered a huge following of fans both in the comics world and in the queer art world. Luce lives in San Francisco with his partner and collaborator, Mark, and their kitty, Luna. He can regularly be found either under a pile of drawing paper or at a local comics festival.

There are so many tantalizing details to tickle readers' fancies, from the chest-hairy end papers to all the visual in-jokes tucked into these panels… With such a wide range of characters, it’s no wonder that Luce’s stories have also found a diverse readership that includes rock ‘n’ roll dudes, women, and kitty lovers. ... Share it with friends and gift yourself: this graphic novel is the best treat anyone can get, short of a basket of kittens!
— Cathy Camper - Lambda Literary

But while Luce’s aesthetic and storytelling impress, it’s Wuvable Oaf’s story that’s endearing. ... The ups and downs and humorous pratfalls that plague Oaf are all things that anyone—regardless of gender or orientation—who has been in a romantic relationship can empathize with. Luce goes small so that his book can go big. The awkwardness, the tenderness, the eroticism, it all comes from a truthful place, a recognizable place, and it’s what makes the series both as funny as it is and as touching.

Few comics have titles as accurate as Ed Luce’s Wuvable Oaf. ... Collecting a project like this is Fantagraphics’ bread and butter, and Wuvable Oaf is definitely a book you’ll want to eat up.

Now collected into a very funny book by Fantagraphics, the tentative-yet-sexy romance between gigantic Oaf and tiny Eiffel will be catnip to bear-lovers and the bears who love them—but also to readers not steeped in the queer scene who simply love a witty, warm-hearted story and a lead character who’s worth rooting for.
— Dan Kois - Slate

Like that of Tales of the City, the queer San Francisco of Wuvable Oaf is a community you wish existed, full of the kind of people you wish you knew. ... Though Luce’s cleanly designed illustrations appear almost entirely in black and white here, they exude a welcoming warmth, thanks in part to the book’s contagious love for its cast of characters. ... A person who is not delighted by Wuvable Oaf is probably not a person.

Luce's writing is as endearing as his protagonist, sweet and humble, well-intentioned and genuine. ... As a protagonist, Oaf comprises the perfect portions of sweetness, shyness, and nervousness to endear and make him relatable to any and all readers who have ever had a crush or fallen in love. ... Gay or straight, there's much to wuv about Wuvable Oaf.

— Zach Hollwedel - Under the Radar

The book is formally inventive and heartfelt, reading like a mid-century romance comic steeped in the lewd sexual fantasies of classic underground comix. But the most admirable aspect is the indelible characterization of Oaf himself, a bear you’ll never forget.
— Abraham Riesman - Vulture

This story of a burly ex-wrestler/kitten fancier has been one of my absolute favorite comics — an affectingly offbeat gay rom-com that captures the universal sadness and silliness of loneliness and love, and mixes heartbreak and humor in exactly the right proportions.
— Patrick Reed - ComicsAlliance

Wuvable Oaf is one of the cutest, most charming underground comics you can read. It also contains many man-nipples. ... All these tiny stories quickly reveal a rich, charming gallery of characters.

Wuvable Oaf is a very silly comic and Luce’s characters are simply drawn but incredibly expressive. Luce lays strange on strange on absurd... until it begins to seem unsustainably zany. But listen, it’s f***ing funny and at times unbearably cute.  ... But even more than the cute, it’s the substance of Wuvable Oaf that makes it so special. ... It’s delightful and I’m disappointed in those of you who haven’t read it yet.

It's a great comic. It's well drawn, and the dialogue and story are grounded, believable and really damn funny... What it most reminds me of, in a skewed kind of way, is Parks and Recreation. That show was, at its heart, about nice people being nice to each other, and there's that same kind of hopeful sweetness here.

This comic has it all – adorable kitties, a black metal/queercore/progressive disco grindcore band, and a search for true romance that is sure to make you laugh, cry, and help you celebrate your inner eccentricities.
— Sam Marx - Comicosity