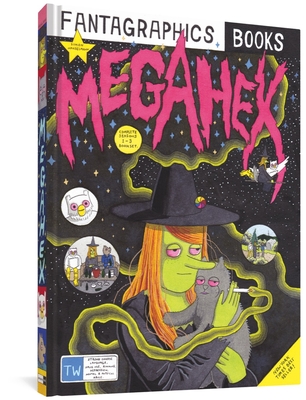 Megg, Mogg & Owl, the stoner roommates of Megahex, started in homage of the children's learning-to-read series Meg & Mog. A fitting origin as these characters have developmentally bottomed-out. Refusing to pay rent, get jobs, or eat healthy, they spin their wheels avoiding depression and boredom with parties, pranks, and drugs. My favorite scenes ask what they'll do when the party turns, the pranks sour, and the drugs wear off. The answer is usually acid.

This is a stoner-comedy webcomic collection; it’s about a witch, her cat and an owl.

Megg is a depressed, drug-addicted witch. Mogg is her black cat. Their friend, Owl, is an anthropomorphized owl. They hang out a lot with Werewolf Jones. This may sound like a pure stoner comedy, but it transcends the genre: these characters struggle unsuccessfully to come to grips with their depression, drug use, sexuality, poverty, lack of work, lack of ambition, and their complex feelings about each other in ways that have made Megg and Mogg sensations on Hanselmann’s GirlMountain tumblr. This is the first collection of Hanselmann’s work, freed from its cumbersome Internet prison, and sure to be one of the most talked about graphic novels of 2014, featuring all of the “classic” Megg and Mogg episodes from the past five years as well as over 70 pages of all-new material.

Simon Hanselmann hails from Tasmania but resides with his family in Los Angeles, CA.  His bestselling New York Times series Megg, Mogg and Owl has been translated into thirteen languages, nominated for multiple Ignatz and Eisner awards, and won Best Series at the Angouleme International Comics Festival in 2018.

For a series about slackers, these books are remarkably emotionally visceral and intense.
— High-Low

Simon's the real deal, for sure. He Captures that stoner stay-at-home life so accurately that I actually find his comics really depressing and thank God I don't ever have to hang out with anybody like that ever again.
— Daniel Clowes

Megahex… is an existential stoner tale that is part Furry Freak Brothers, part Beavis and Butt-Head, and part Jean Paul Sartre (with some Jackass thrown in for good measure)…. It would be easy to dismiss Megahex as another stoner comic. But there’s so much lurking beneath the seemingly superficial surfaces -- questions about friendship, loyalty, love, drug addiction, sexual identity, and hopelessness. There are plenty of hysterical Darwin Award-worthy situations in Megahex, but that’s not likely to be your takeaway. And what you’ll leave with is far scarier than any spook house frights; the fear of looking deeply at yourself in the mirror and finding a monster (or nothing) in your place.
— Gareth Branwyn - Boing Boing

The strips are intricately drawn and painstakingly watercoloured, while the narratives are a gloomy insight into the lives of suburban down-and-outs. Reading... Hanselmann evokes conflicting emotions; the characters are hilarious, yet moments of desperation and true sadness emerge from the bong smoke.
— William Stanforth - Broadsheet

Featuring old-school underground comix, but with the style and serial nature of even older-school Sunday newspaper comics strips, Megahex is the sort of comic that could only gestate on the Internet, and only find final, full expression in book form from a publisher like Fantagraphics. [Rating: 4 out of 5 stars]
— J. Caleb Mozzocco - Las Vegas Weekly

Profane though it is, the narrative of three 20-something roommates casually tormenting each other mixes an intelligent understanding of depression and anhedonia with its crudeness.
— Hillary Brown - Paste

The story is depressing as often as it is funny, a cautionary tale that’s at its best when Hanselmann spreads his writing wings, extending beyond a gag strip into an honest exploration of his deeply flawed leads.
— Publishers Weekly

The best way to describe these comics to anyone who hasn’t read them is simply to say they feel complete, with everything precisely in its right place, as if Hanselmann’s tiny panels really were just little windows into a strange universe of post-college weirdos, slackers, and psychotics who just happen to be talking animals. ... Buy this because it deserves to sell a million copies.
— Tim O'Neil - The A.V. Club

[Megahex] adds up to a definitely non-heteronormative and often hilarious, and sometimes touching, reading experience.
— Robert Kirby - The Comics Journal

Megg and Mogg are unforgettable leads, and Owl and Jones are the perfect foils, and Hanselmann’s art pops off the page thanks to his gorgeous use of colour. Hanselmann is a consummate artist and writer.
— Lee Henderson (The Road Narrows as You Go) - The Globe and Mail

Every time Megahex seems so self-aware and so cool, to exhale so loudly and profoundly at the banality of it all, it will inhale so deeply and fully that you can’t help but fill your own lungs along with it. ... What is the genius of Simon Hanselmann? His precise and natural sense of comedic timing? The food colouring he paints with? His turns of affection and sadism for his characters? What is the magic that he weaves?
— Leonie Brialey - The Lifted Brow

...Megg’s depression isn’t your garden-variety Prozac episode. She’s so invariably and subtly disconsolate and experiences such disturbing mood swings that it’s impossible not to feel at least a tinge of that heavy sadness. And because the book is funny, too — they smoke lots of pot — her depression seems that much more real.
— Nicole Rudick - The Paris Review

[Megahex] is the cruelest kind of laugh-out-loud funny. … There’s a sadness that pervades the whole book… but it builds a world of hilarious, odd, and sometimes downright mean moments that makes these characters feel real enough to be wholly entertaining.
— Gene Ambaum - Unshelved

Every page is beautiful. Every joke is funny. Every character is a complete asshole.
— Nick Gazin - Vice

What Simon Hanselmann does with his comics is what any artist and/or writer worth his or her salt does: take you somewhere, make you feel something. The most disturbing, and most exhilarating, moment for me in comics this year, or any year, must be Werewolf Jones taking a cheese grater to his testicles. Pure genius.
— Henry Chamberlain - Comics Grinder

Megahex... subverts all expectations. ... Looking at it you wouldn’t expect what looks like a stoner-comedy-romp to take the reader into such heavy material. To read Megahex is to get into the mind and past of the book’s fascinating author...