Art and Curiosity Cabinets of the Late Renaissance: A Contribution to the History of Collecting (Texts & Documents) (Paperback) 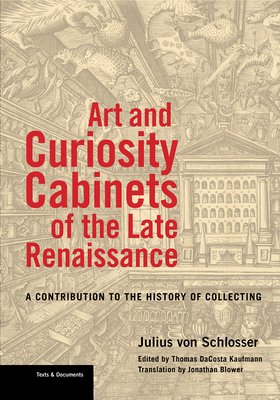 For the first time, the pioneering book that launched the study of art and curiosity cabinets is available in English.

Julius von Schlosser’s Die Kunst- und Wunderkammern der Spätrenaissance (Art and Curiosity Cabinets of the Late Renaissance) is a seminal work in the history of art and collecting. Originally published in German in 1908, it was the first study to interpret sixteenth- and seventeenth-century cabinets of wonder as precursors to the modern museum, situating them within a history of collecting going back to Greco-Roman antiquity. In its comparative approach and broad geographical scope, Schlosser’s book introduced an interdisciplinary and global perspective to the study of art and material culture, laying the foundation for museum studies and the history of collections. Schlosser was an Austrian professor, curator, museum director, and leading figure of the Vienna School of art history whose work has not achieved the prominence of his contemporaries until now.

This eloquent and informed translation is preceded by Thomas DaCosta Kaufmann’s substantial introduction. Tracing Schlosser’s biography and intellectual formation in Vienna at the turn of the twentieth century, it contextualizes his work among that of his contemporaries, offering a wealth of insights along the way.

Thomas DaCosta Kaufmann is the Frederick Marquand Professor of Art and Archaeology at Princeton University. His many books include Toward a Geography of Art, also published by the University of Chicago Press.

“This first English translation of Julius von Schlosser’s classic study of the Kunstkammer (1908) is a cause for celebration by anyone interested in the history of collections. Directly or indirectly, his book inspired a legion of studies on early modern art and curiosity cabinets, a subject that continues to captivate our imagination and has shaped the appearance of some museum displays. Thomas DaCosta Kaufmann’s penetrating introduction examines Schlosser, his intellectual contributions as a curator and teacher, his place within Viennese art history around 1900, and his subsequent reputation.”

“Schlosser’s book is a classic of art history: still a standard text for all students of the first great age of collecting, but one which, previously unavailable in English, had remained unfamiliar to a wider audience. This translation, whose virtuosity matches that of Schlosser’s original writing, is here combined with a superb appreciation by Kaufmann of the author's life and works. Schlosser used the extraordinary world of the “cabinet of curiosities” to explore not only how and why museums came into being, as repositories of universal learning and global outreach, but also the gestation of distinctly modern notions of “art” and “nature” and of the “artificial” over against the “natural,” concepts that coexisted in multifarious ways in the minds of the collectors he describes.”

“This fascinating publication not only illuminates the history of art history through Schlosser's pioneering study from the early twentieth century, but also offers new insight into important dimensions of the culture of turn-of-the-century Vienna in which Schlosser participated as an art historian. Schlosser's study of art collections and curiosity cabinets allows us to understand better the complex cultural relation between late Habsburg art and museum culture and the early modern Habsburg period that is so fundamental for his analysis, especially concerning the collections of Emperor Rudolf II in Prague. Finally, the whole publication is framed by the exceptionally interesting introduction of the very distinguished Princeton art historian Thomas DaCosta Kaufmann, who is well known for his studies of art and culture in the early modern Habsburg monarchy. This book will be of great interest to scholars of art history specializing in art collecting and collections, cabinets of wonders or curiosities, and Habsburg culture."

—Larry Wolff, Professor of History, New York University and author of The Singing Turk: Ottoman Power and Operatic Emotions on the European Stage from the Siege of Vienna to the Age of Napoleon

“It was an excellent idea to make Schlosser’s classic work—which everyone interested in collections and museums should read—available in English. The translation is enriched by an introduction by Thomas DaCosta Kaufmann that situates Schlosser in his milieu, Vienna circa 1900, and brings him back to life.”

“A half century or so of recent scholarship has brought the extraordinary collections of art amassed by fifteenth- and sixteenth-century noble courts to public view and imagination, with the result that chambers of wonders and curiosity cabinets are nearly household concepts. All such scholarship looks back to, and cites, Julius von Schlosser’s Die Kunst- und Wunderkammern der Spätrenaissance of 1908. Until now, however, the author of this precocious work has remained little known in English. This authoritative and thoughtful English translation by Jonathan Blower with an introduction on Schlosser’s place in the history of art by the polymathic doyen of art history, Thomas DaCosta Kaufmann, itself forms a milestone in the still-burgeoning scholarly literature on Kunstkammer collections.”

“Originally published in German in 1908, this seminal study of the Wunderkammer as a forerunner to the modern museum has been given an English translation for the first time.”

“This is an excellent translation with valuable annotations of an important but unusually quirky and difficult text on a subject not easily accessible.”
— Karl Johns

“Through an informative discussion of the author’s biography and intellectual background, as well as of the cultural and historical Viennese context, DaCosta Kaufmann shows why this relatively short book was not only a pioneering contribution to the history of art at the time of its publication, but also why it should itself be regarded today as an interesting product of European culture at the turn of the 20th century.”
— Barbara Furlotti

“Required reading for those interested in museum studies, history of collecting, or methods of art history.”