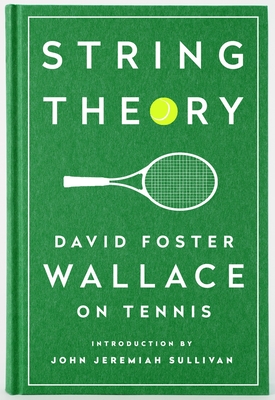 An instant classic of American sportswriting—the tennis essays of David Foster Wallace, “the best mind of his generation” (A. O. Scott) and “the best tennis-writer of all time” (New York Times)

Gathered for the first time in a deluxe collector's edition, here are David Foster Wallace's legendary writings on tennis, five tour-de-force pieces written with a competitor's insight and a fan's obsessive enthusiasm. Wallace brings his dazzling literary magic to the game he loved as he celebrates the other-worldly genius of Roger Federer; offers a wickedly witty disection of Tracy Austin's memoir; considers the artistry of Michael Joyce, a supremely disciplined athlete on the threshold of fame; resists the crush of commerce at the U.S. Open; and recalls his own career as a "near-great" junior player.

David Foster Wallace (1962–2008) was born in Ithaca, New York, in 1962 and raised in Champaign-Urbana, Illinois, where in his teens he was a regionally ranked junior tennis player. His works include Infinite Jest, Girl with Curious Hair, Brief Interviews with Hideous Men, Oblivion, A Supposedly Fun Thing I’ll Never Do Again, and Consider the Lobster. His final novel, The Pale King, was posthumously published in 2011.

John Jeremiah Sullivan is one of America’s leading practitioners of the long-form magazine profile, with work appearing in The New York Times Magazine (where he is a staff writer), Harper’s (of which he is a contributing editor), The New Yorker, New York, Oxford American, GQ, and other magazines. He is the author of Blood Horses: Notes of Sportswriter’s Son and Pulphead.

“This book has nothing to do with physics, but its title will make you look super smart if you’re reading it on a train or plane.” —Bill Gates

“A wonderful and inspiring collection for fans of either tennis or eye-popping prose.”
—Austin American-Statesman

“String Theory stands as a monument to Wallace’s talent—and his dedication to the game.”
—Doug Perry, The Oregonian/The Spin of the Ball

“This collection is a tennis classic that deserves shelf space next to John McPhee’s Levels of the Game and Brad Gilbert’s Winning Ugly.” —Jeff Simon, The Buffalo News

“David Foster Wallace’s essays on tennis are a treasure, some of the best writing ever on the sport, and they are all here in the Library of America’s this deluxe hardcover collector’s edition.”
—NY Sports Day

“Wallace’s grasp of tennis was truly prodigious. . . . He has often been described as the best tennis writer of all time, and these essays don’t disabuse that notion.” —The Guardian (UK)

“What makes this collection so valuable for serious tennis fans is the chance to see ‘the most beautiful sport there is’ through Wallace’s eyes.” —Toure, Town & Country