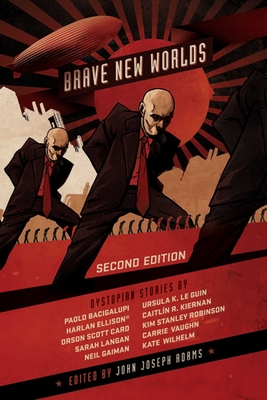 What happens when civilization invades and dictates every aspect of your life? From 1984 to The Handmaid's Tale, from Children of Men to Bioshock, the dystopian imagination has been a vital and gripping cautionary force.

You are being watched. Your every movement is being tracked, your every word recorded. Your spouse may be an informer, your children may be listening at your door, your best friend may be a member of the secret police. You are alone among thousands, among great crowds of the brainwashed, the well-behaved, the loyal. Productivity has never been higher, the media blares, and the army is ever triumphant. One wrong move, one slip-up, and you may find yourself disappeared -- swallowed up by a monstrous bureaucracy, vanished into a shadowy labyrinth of interrogation chambers, show trials, and secret prisons from which no one ever escapes. Welcome to the world of the dystopia, a world of government and society gone horribly, nightmarishly wrong.

When the government wields its power against its own people, every citizen becomes an enemy of the state. Will you fight the system, or be ground to dust beneath the boot of tyranny?

Skyhorse Publishing, under our Night Shade and Talos imprints, is proud to publish a broad range of titles for readers interested in science fiction (space opera, time travel, hard SF, alien invasion, near-future dystopia), fantasy (grimdark, sword and sorcery, contemporary urban fantasy, steampunk, alternative history), and horror (zombies, vampires, and the occult and supernatural), and much more. While not every title we publish becomes a New York Times bestseller, a national bestseller, or a Hugo or Nebula award-winner, we are committed to publishing quality books from a diverse group of authors.

John Joseph Adams, called "the reigning king of the anthology world" by Barnes & Noble.com, is the bestselling editor of many anthologies, such as Under the Moons of Mars: New Adventures on Barsoom, Armored, Lightspeed: Year One, Brave New Worlds, Wastelands, The Living Dead, The Living Dead 2, By Blood We Live, Federations, The Improbable Adventures of Sherlock Holmes, and The Way of the Wizard. He is a two-time finalist for the Hugo Award and a three-time finalist for the World Fantasy Award. He is also the editor and publisher of Lightspeed magazine, and is the co-host of The Geek's Guide to the Galaxy podcast. Forthcoming anthologies include Epic (Tachyon, Fall 2012) and The Mad Scientist's Guide to World Domination (Tor Books, 2013). Find him online at johnjosephadams.com and on Twitter @johnjosephadams.