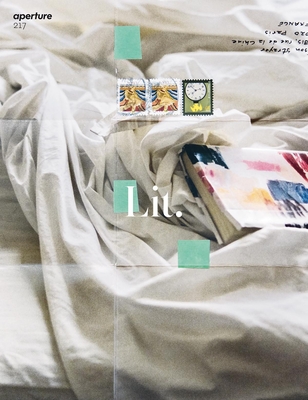 This is book number 217 in the Aperture Magazine series.

Visual cues from works of literature, poetics, and prominent writers. At a cultural moment when images are arguably placing increased pressure on the written word, Aperture's Lit issue looks at the many relationships between photography and writing by considering photography projects that take cues from works of literature, play with image-text pairings and poetics, or were in fact produced by prominent writers, such as William S. Burroughs, Kobo Abe and Herve Guibert, who all moonlighted as photographers. The issue features an impressive line up of contemporary writers offering their views on photography, including Teju Cole, Tom McCarthy, Mary Gaitskill, Heidi Julavits, Geoff Dyer and Janet Malcolm, as well as Pulitzer Prize winning poets John Ashbury and Richard Howard, among many others.