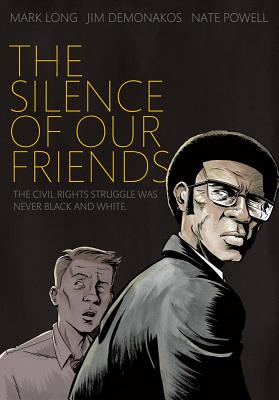 By Mark Long, Jim Demonakos, Nate Powell (Illustrator)
$19.99
Not On Our Shelves - Available to Order

As the civil rights struggle heats up in Texas, two families-one white, one black-find common ground.

This semi-autobiographical tale is set in 1967 Texas, against the backdrop of the fight for civil rights. A white family from a notoriously racist neighborhood in the suburbs and a black family from its poorest ward cross Houston's color line, overcoming humiliation, degradation, and violence to win the freedom of five black college students unjustly charged with the murder of a policeman.

The Silence of Our Friends follows events through the point of view of young Mark Long, whose father is a reporter covering the story. Semi-fictionalized, this story has its roots solidly in very real events. With art from the brilliant Nate Powell (Swallow Me Whole) bringing the tale to heart-wrenching life, The Silence of Our Friends is a new and important entry in the body of civil rights literature.

The Silence of Our Friends Author Q&A

How much of this book's story is based on real events?

Mark Long: Creating a book like this one required us to find a balance between factual accuracy and emotional authenticity. Some details as well as names have been changed for storytelling purposes. But the facts are that in 1967 Texas Southern University students began a boycott of classes after the Student Nonviolent Coordinating Committee was banned from campus, and on May 17th they staged a sit down protest on Wheeler Avenue over conditions at the nearby city garbage dump. The protest evolved into an police riot that night when an undercover officer was shot and over 200 officers responded by pouring rifle and machinegun fire into the men's dormitory. The police later stormed the dormitory and arrested 489 students after a policeman was shot and killed. All but 5 of the students were released the next day. They came to be called the "TSU Five" and were charged with the murder of the slain officer. Only one of the students stood trial in Victoria Texas due to publicity in Houston. His trial ended with the dismissal of all charges against the five when it was discovered that the officer was shot accidentally by another officer.

With the civil rights struggle as a backdrop to the story, how did you balance a contemporary perspective on race with the reality of race issues at the time?

Nate Powell: While visualizing and adapting Mark's largely autobiographical work on the story, I found myself calling on my own experiences as a kid in Alabama, Mississippi, and Arkansas in the 1980's. Though the story takes place in a specific historical framework, many of the attitudes, details, atmospheric elements, and anecdotes were extremely familiar to me -- sometimes too familiar. As the pages progressed, the twenty years between our Southern childhood experiences didn't seem like much of a difference at all, which was certainly disturbing at times.

There were frequent case-by-case conversations about accurate depictions of racism, the privilege of authorship, and inherent charge carried by racism's role in the book. Generally speaking, we determined that this was in many ways a brutal story but a very accurate one, and respecting the very real violence carried by certain words and actions allowed us to give them their ugly space in the narrative, for better or for worse.

Is much knowledge of the civil rights movement required?

Mark Long: Everything that pushes the narrative forward is contained within the story's pages, and a lot of the civil rights and struggle-related content is specific to Houston in 1967-68. It definitely covers what readers might need to know without having expertise on the civil rights movement. Having said that, however, I think readers are rewarded throughout the book as characters are offered windows through which they witness a much more massive social upheaval, framed within the last few months of Dr. Martin Luther King's too-short life.

There's no easy way to categorize this book, how would you describe it?

Mark Long: I'd say it's a culture's own coming-of-age tale. By that, I mean it's first and foremost an exploration of shifting boundaries: towns and neighborhoods, friends and families, customs and attitudes all on the threshold of massive (and ongoing) change. The boundaries themselves take on lives of their own at times. In a more traditional sense, it's also equal parts a story centering on two families' internal relationships as they find themselves in each other's orbit, struggle narrative, friendship-betrayal tale, and courtroom drama.

Why choose to tell this story in a graphic format?

Nate Powell: As the story's climax is dependent on sorting through multiple points of view, it's appropriate that comics are ideal medium by which to tell a tale with so many lenses. The book offers a pretty intimate view of the world through main characters' points of view, but bringing the narrative even closer through Mark's eyes and balancing them all without judgment highlight the strengths of comics storytelling.

Mark Long is a video game designer and producer living in Seattle. The Silence of Our Friends is based on Long’s childhood experiences with the civil rights movement in suburban Houston, Texas.

Jim Demonakos founded Seattle’s annual Emerald City Comicon, as well as The Comic Stop chain of retail stores. He has written, edited, and promoted a variety of books for different publishers throughout his career. He lives in the Seattle area. With Mark Long, Jim coauthored the New York Times bestselling graphic novel, The Silence of Our Friends.

Nate Powell is an Arkansas native and Eisner Award-winning cartoonist whose works include Swallow Me Whole (an Los Angeles Times Book Prize finalist), Any Empire, and (with co-authors Congressman John Lewis and Andrew Aydin) the March trilogy, the final volume of which won the National Book Award for Young People's Literature. Powell is the first cartoonist to receive this honor. He lives in Bloomington, Indiana.

"…convincingly depicts the systemic racism, blatant and subtle, that suffused and corroded everything during [the] period…[Powell's] imagery amplifies the effects of the book's multiple perspectives—the overwhelmed kid's-eye view of uneasy family dynamics and open Texas spaces, the hyperkinetic chaos on campus, the cropped literalism of TV newscasts." —The New York Times

"...an engrossing narrative about race in America, while honestly dealing with a host of other real-world issues, including familial relationships, friendship, dependency, "other"-ness, and perhaps most importantly, the search for common ground." —Publishers Weekly