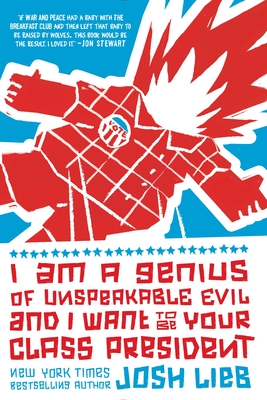 By Josh Lieb
$8.99
On Our Shelves Now - Available to Ship to Your Home

I liked this book so much more when 87% of its title didn't perfectly describe the living nightmare we're suffering through as a nation but even saddled with the context of current events it is one of the funniest things I've ever read. Ideal for your elementary-aged Slytherin.

“Twelve-year-old Oliver Watson is set not only to take over the world, but to win the upcoming middle school election. He may not be able to convince all of his fellow classmates to vote for him, but he will make every reader laugh (out loud, no less) until they plead 'uncle' and pledge to pass the book onto the guy at the next locker.”
— Lisa Baudoin, Books & Company, Oconomowoc, WI

When a provocation from his dad irks twelve-yearold evil genius Oliver Watson, he'll have to put his plans for world domination on hold in order to beat the pants off the competition and win the middle school election!

Josh Lieb is an Emmy-winning executive producer of The Daily Show with Jon Stewart, and has worked on such shows as The Simpsons and NewsRadio. I am a Genius of Unspeakable Evil and I Want to Be Your Class President is his first novel. He lives in New York with his wife and family.

"If War and Peace had a baby with The Breakfast Club and then left the baby to be raised by wolves, this book would be the result. I loved it." – Jon Stewart

“Josh Lieb is on one of the great brave journeys in American literature. Or maybe he just signed my name to a blurb he wrote. Either way, you have to admit he’s brave. And the book is hilarious.” – Judd Apatow

“Pitch perfect…Every kid who’s ever felt put upon, misunderstood, and, let’s admit it, infinitely superior to his or her peers will laugh out loud as they enter Oliver’s hilarious secret world…” – BCCB, starred review

"Lieb perfectly captures the wise-guy sarcasm and trash mouth of a seventh-grade evil genius...This is a book kids will be talking about." – School Library Journal

"Similar to Artemis Fowl but without the supernatural element, Lieb's creative and twisted first novel gets a positive vote." – Kirkus

“Beware, kids: Once your parents pick it up, they won’t be able to put it down. (Guilty as charged.)” – New York Post

“Walter Mitty for teenagers, especially those who do not fit in. They will become huge fans of this book.” – VOYA