The Hermetic Code in DNA: The Sacred Principles in the Ordering of the Universe (Paperback) 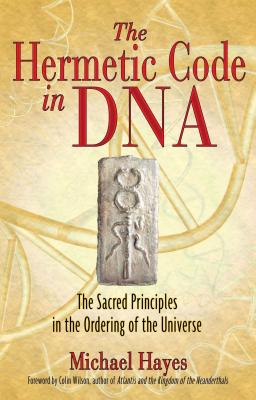 Many have observed the distinct numerical patterns embedded in ancient philosophies and religions from all over the world; others have noted that these same patterns are apparent in many of the theories of groundbreaking science. Michael Hayes reveals that there is a precise code, the Hermetic Code, that connects these patterns--information once known to ancient cultures but apparently lost over time. Mirrored in the structure of this code are the ordering principles of the universe and, intriguingly, also the harmonic ratios of music. Our notions of what is harmonious in music may therefore arise not from an abstract aesthetic sense but as a response to an intuition of a fundamental cosmic harmony.

The resonance between biology and cosmology shows that life is music, complete with “overtones”--nowhere more strikingly present than in the helical structure of life itself: DNA.

Michael Hayes is an administrator at the University of Central England and is the author of The Infinite Harmony and The Hermetic Code in DNA. He first recognized a common link between all major religions and esoteric doctrines--and later that this symmetry exists among the fundamental sciences--while working in post-revolutionary Iran, where he was able to observe all the major religions practiced side by side. He lives with his wife and family in Birmingham, England.

Colin Wilson (1931-2013) was a prolific author whose works include the bestselling The Outsider, From Atlantis to the Sphinx, and his autobiography, Dreaming to Some Purpose. He was also the coauthor, with Rand Flem-Ath, of The Atlantis Blueprint.

“In showing the connection between the Hermetic Code and the genetic code, Michael Hayes points to the fact that the essence of evolution can also be found in religion, and therefore in the realm of the evolution of consciousness. . . . What he has discovered could be as important as the original discovery of DNA. Like Jurij Moskvitin and Jeremy Narby, he has created a new paradigm--that is, he is looking at our familiar universe from a new angle and making us aware of magical possibilities.”
— Colin Wilson, from the Foreword

"The author is an administrator at the University of Central England, so he is writing from a point of view that is professionally and educationally unbiased toward his subject. This is somewhat unusual in this type of writing and allows him to more readily relate to the average reader."
— David Paulsen, New Age Retailer