The Man Without a Face: The Unlikely Rise of Vladimir Putin (Paperback) 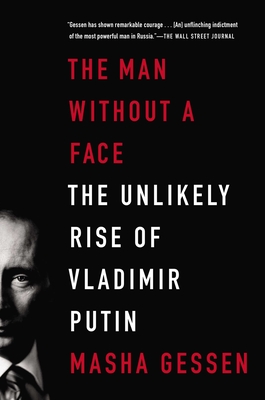 “In a country where journalists critical of the government have a way of meeting untimely deaths, Gessen has shown remarkable courage in researching and writing this unflinching indictment of the most powerful man in Russia.” —The Wall Street Journal

“Thanks to fearless reporting and acute psychological insights, Masha Gessen has done the impossible in writing a highly readable, compelling life of Russia's mysterious president-for-life.” –Tina Brown, The Daily Beast

The Man Without a Face is the chilling account of how a low-level, small-minded KGB operative ascended to the Russian presidency and, in an astonishingly short time, destroyed years of progress and made his country once more a threat to his own people and to the world.

Handpicked as a successor by the "family" surrounding an ailing and increasingly unpopular Boris Yeltsin, Vladimir Putin seemed like a perfect choice for the oligarchy to shape according to its own designs. Suddenly the boy who had stood in the shadows, dreaming of ruling the world, was a public figure, and his popularity soared. Russia and an infatuated West were determined to see the progressive leader of their dreams, even as he seized control of media, sent political rivals and critics into exile or to the grave, and smashed the country's fragile electoral system, concentrating power in the hands of his cronies.

As a journalist living in Moscow, Masha Gessen experienced this history firsthand, and for The Man Without a Face has drawn on information and sources no other writer has tapped. This account of how a "faceless" man maneuvered his way into absolute—and absolutely corrupt—power is the definitive biography of Vladimir Putin.

Masha Gessen is the author of eleven other books, including the National Book Award–winning The Future Is History: How Totalitarianism Reclaimed Russia and Surviving Autocracy. A staff writer at The New Yorker and the recipient of numerous awards, including Guggenheim and Carnegie fellowships, Gessen teaches at Bard College and lives in New York City.

A Slate and San Francisco Chronicle Best Book of 2012

"[An] absorbing portrait… Gessen is most illuminating when she details the historical accidents that allowed an unexceptional bureaucrat to rule Russia." –The New Yorker

“Part psychological profile, part conspiracy study… As a Moscow native who has written perceptively for both Russian and Western publications, Gessen knows the cultures and pathologies of Russia… [and has] a delicious command of the English language… A fiercely independent journalist… Gessen’s armchair psychoanalysis of Putin is speculative. But it is a clever and sometimes convincing speculation, based on a close reading of Putin’s own inadvertently revealing accounts of his life, and on interviews with people who knew Putin before he mattered.” –The New York Times Book Review

“In a country where journalists critical of the government have a way of meeting untimely deaths, Ms. Gessen has shown remarkable courage in researching and writing this unflinching indictment of the most powerful man in Russia… Although written before the recent protests erupted, the book helps to explain the anger and outrage driving that movement.” –The Wall Street Journal

“Thanks to her fearless reporting and acute psychological insights, Masha Gessen has done the impossible in writing a highly readable, compelling life of Russia's mysterious president-for-life.” –Tina Brown, The Daily Beast

"Powerful and gracefully written… Gessen's book flows on multiple tracks, tracing Putin's life back to boyhood, the story of his hometown of St. Petersburg, and finally the last quarter-century of Russian history… For all of the ghoulish detail, Gessen's account of Russia is not overwrought… [she] displays impressive control of her prose and her story, painting a portrait of a vile Putin without sounding polemical." –San Francisco Chronicle

“[An] incisive bildingsroman of Putin and his regime… Alongside an acute apprehension of the post-Soviet dynamics that facilitated Putin’s rise, Gessen balances narratives of Putin-as-bureaucrat and Putin-as-kleptocrat with a wider indictment of the “Mafia clan” that retains him solely as its Godfather.” –The Daily

“Illuminating… Gessen sprinkles telltale signs of the Putin who would eventually emerge and rule Russia with an iron fist…It is with these explosive revelations that Gessen truly excels… [She] presents her case calmly, picking holes in Putin’s character, his policies, and his rule without stooping to hysterical condemnation… an electrifying read from what can only be described as an incredibly brave writer.” –Columbia Journalism Review

“A chilling and brave work of nonfiction… Gessen has succeeded in convincingly portraying the forces that made Putin who he is today.” –Bookpage

"Although Gessen is enough of an outsider to write beautifully clear and eloquent English, she is enough of an insider to convey, accurately, the wild swings of emotions, the atmosphere of mad speculation, the paranoia, and, yes, the hysteria that pervade all political discussion and debate in Moscow today." –The New York Review of Books

“What Gessen sees in Putin is a troubled childhood brawler who became a paper-pushing KGB man and, by improbable twists and turns, rose to the top in Russia… [She] does not attempt to weigh up Putin’s record but rather examines his biography, mind-set and methods… as a thug loyal to the KGB and the empire it served who never had a clue about the Earth-shattering events that blew the Soviet Union apart.” –The Washington Post


“An eye opening story with all the drama and intrigue of a novel.” –Popmatters

“Written in English but with Russian heart, Gessen focuses on the places and institutions that bred the nation's most resolute leader since Stalin… Some might say that Gessen's interpretation is political. Of course it is… but more importantly, it is thorough. She has seen fellow journalists killed, has been harassed herself, and yet continues to write from Russia… Her urgency is felt on nearly every page.” –Bookforum