The Legion of the Damned: The Adventures of Bennett J. Doty in the French Foreign Legion as Told by Himself (Paperback) 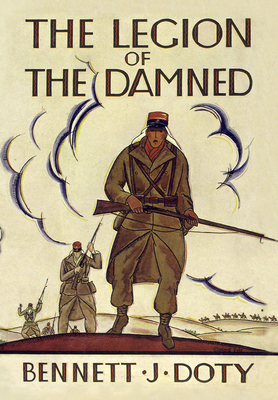 The Riveting Memoir of an American Volunteer in the French Foreign Legion during the 1925 Revolt in Syria
“You see there was down South a girl I liked. And she is now married . . . not to me.” So Bennett J. Doty confessed when he sailed for France and enlisted in the French Foreign Legion in 1924. A World War I veteran and University of Virginia student, Doty first trained in Morocco and Algeria before being shipped off to the French-controlled State of Syria. There, he and his fellow “bleus,” who hailed from Belgium, Poland, Italy, Senegal, Spain, Germany, Russia, and other countries, found themselves at the spearhead of the attempt to quell the revolt against French rule in the area. The fighting, mostly against the Druze, was fierce, merciless, and unrelenting. Fought in villages and at isolated outposts, there was no quarter. Entire villages were razed, fields destroyed, and prisoners were not taken by either side. In the engagement where Doty and several other of his “copains”—“buddies”—earned the Croix de Guerre, his unit became isolated and withstood days of attacks which claimed more than half of the Legionnaires until they were finally relieved by a French colonial column. With the immediate fighting over, the Legion was put to heavy manual labor under the hot desert sun. Doty became disillusioned, and with four other soldiers, fled in an attempt to reach British-controlled Jordan. They were caught, tried, and Doty was sentenced to eight years in a French prison. When word reached the United States, diplomatic efforts ultimately gained Doty a pardon and honorable discharge from service.
Originally published in 1928, Legion of the Damned, Doty’s acclaimed account of his time in the Legion, is a remarkable memoir that requires no additional drama to allow the reader to experience the desperation, exhilaration, fear, and disgust of a colonial war. Here, Doty shows how drunken, unruly, vicious veterans would transform into capable, cool, and orderly soldiers as soon as a battle began—the élan that earned the French Foreign Legion its reputation as a legendary fighting unit.

Bennett Jeffries Doty (1900–1938), born in Alabama, served with the 115th Field Artillery during World War I, and fought in the Battle of St. Mihiel and the Meuse-Argonne Offensive. Following his service in the French Foreign Legion and return to the United States, he was admitted to the Mississippi Bar in 1936. In 1938, he joined the International Brigade in Spain, where he was mortally wounded in battle during the Spanish Civil War.

Praise for the Original Edition:
“The book itself from first page to the last has a pleasing honesty. One finishes it with a feeling that the Foreign Legion is ‘like that,’ the good of it and the bad of it told without exaggeration and with balanced candor. While Doty never boasts of his personal exploits, it is clear he made a good legionnaire and fought like the devil.”—New York Herald Tribune

“What is of interest in his book is the picture of the no-quarter warfare between the French and Druses in and around Damascus. Even Lawrence’s Revolt in the Desert, larger and more significant though his canvas is, has few more humanly vivid pages than some of the chapters in The Legion of the Damned, describing the hand-to-hand struggles in the campaign.”—New York Times

“It is the type of story that most people will read at one sitting, but totally unlike other stories of that class, it will leave something permanent and valuable to the reader whose mind is alert enough to allow him to appreciate its rare history and geographic description.”—Boston Transcript

“This is a capital narrative. . . . His narrative of what he saw and engaged in has all the stamp of truth on it.”—New Statesman

“Out of Doty’s tale emerges a picture of the Foreign Legion which is probably truer than anything to date. Its life, as he reveals it, is one of iron discipline, stark passion, valor and quick death.”—New York World