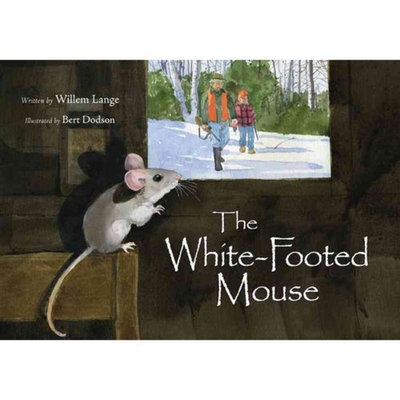 A boy is sure he has the world's best father, an outdoorsman who shows him the hiding places of ground-nesting birds and teaches him to paddle a canoe and handle a rifle safely.  Never point your gun at anything you don't intend to shoot, his father tells him, and don't kill anything you don't intend to eat. When he's eight years old, he is finally allowed to go to hunting camp with his father. They climb through dark woods to the icy-cold camp, where Dad starts a fire in the stove. A few minutes later, a tiny, shivering white-footed mouse emerges from his nest to share the warmth of the stovepipe. The boy feeds him a bit of cheese and sees that the mouse trusts him. Later, when his father begins to bait a mouse trap, the boy wittily  reminds his Dad of the lesson he had taught him.The White-Footed Mouse is Willem Lange's and Bert Dodson's latest collaboration, a delightfully illustrated parable for lovers of nature and the great outdoors and for kids who want to keep their Dads in line.Willem Lange is a short-story writer, columnist, commentator, and host on Vermont Public Radio and New Hampshire Public Television.This is his third children's book with Bert Dodson. He lives with his wife in East Montpelier, Vermont.Bert Dodson is the author and illustrator of the best-selling learn-to-draw classic Keys to Drawing as well as the illustrator of over 80 children's books including a previous one with Willem Lang.  He has also co-written The Way Life Works with noted biologist Mahlon Hoagland.  He lives in Bradford, Vermont.Advance PraiseWhen I was a 15-year-old kid, Will arrived in our tiny Adirondack Mountain town. It was the beginning of an enduring and profound friendship. Over fifty years we've paddled, climbed, hunted, and fished together, and listened to each other. This story is Will at his best: a man, a boy, and a mouse in a camp together, a tender story of respect and caring for one another in the most important ways.--Baird Edmonds, retired designer, contractor and outdoorsman  What a wonderful and beautifully illustrated story!  A father teaches his son about nature and ethics, and the son then gives his father a lesson. Willem Lange is a master storyteller and The White-Footed Mouse is one of his best. Beautifully written and beautifully illustrated, the story has lessons for us all.  Though written for youth, it's one that every parent and grandparent will treasure. It's destined to become a classic that future generations will enjoy and learn from.--Gary Moore, syndicated columnist, broadcaster and former Vermont Commissioner of Fish and Wildlife

Bert Dodson is the author and illustrator of the best-selling learn-to-draw classic Keys to Drawing as well as the illustrator of over 80 children's books including a previous one with Willem Lang. He has also co-written The Way Life Works with noted biologist Mahlon Hoagland. He lives in Bradford, Vermont. .

Willem Lange is a short-story writer, commentator and host on Vermont Public Radio and New Hampshire Public Television. He also has a weekly column in The Valley News, the major newspaper in the NH/VT Upper Valley area. In addition to the Yuletide readings of his Christmas story, Favor Johnson, a staple on Public Radio for fifteen years, his annual readings of Charles Dickens' A Christmas Carol -- on stage, on Vermont Public Radio, and on Armed Forces Radio overseas -- have been popular since 197