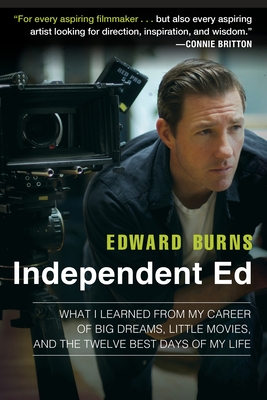 By Edward Burns, Todd Gold
$16.00
In Stock at Publisher - Available to Ship to Your Home

Acclaimed independent filmmaker Ed Burns shares the story of his remarkable career and offers a candid, instructive account of the ins-and-outs of making great movies without the backing of Hollywood.

As the second of three children from a working-class Long Island family, Ed Burns thought a career in filmmaking was a pipe dream. When his first film, The Brothers McMullen, won the Grand Jury Prize at the Sundance Film Festival, he proved himself to be one of the most distinctive and tenacious filmmakers of our time. Since then he has gone on to star in major Hollywood films while remaining dedicated to his true passion: making small films that he believes in.

Sharing the lengths he's gone to in order to write, direct, cast, produce, shoot, and edit films on a shoestring budget, Burns uses stories from his life and career to illustrate what it takes to make it as an indie filmmaker. His extreme focus and drive prove that passion and hard work can pay off, and he urges students and aspiring filmmakers to embrace and learn from their failures—and continue to pursue their goals. A gripping, inspirational story about forging your own path, Independent Ed is a must-read for casual movie fans, serious film students, and any creative person searching for a bit of inspiration.

Ed Burns was born in Woodside, Queens, and raised on Long Island. While in college in New York City, Burns switched his focus from English to filmmaking before quickly moving on to make The Brothers McMullen, which won the Grand Jury Prize at the Sundance Film Festival. He has acted in 31 films and written, produced, and/or directed 13 others. He lives in New York City with his wife and two children.

"Every young, hungry, creative person should view this as a textbook.... It's a how-to." —Matt Lauer, Today

“‘Independent Ed’ is Burns' inspirational speech to filmmakers wondering how to begin, or how to keep going.” – Newsday

“Mr. Burns’ charm stems largely from his ability to play the nice, real guy – the sort of guy who, despite landing roles in Hollywood films like “Saving Private Ryan,” gets excited when Al Pacino says hi to him in a restaurant.” –The Wall Street Journal, Weekend Journal

“Independent Ed… doubles as a handbook for aspiring filmmakers who need to stay afloat in an ever-mutating business.” – Metro New York

“[Ed Burns] prides himself on his ability to pitch, making it  ‘feel like I was telling a story while sitting at the bar with a beer in my hand.’ Fortunately, that’s also the easy tone of his memoir, which focuses on his hardscrabble moviemaking career after his initial brush with success 20 years ago.” – Entertainment Weekly

“His book is an attempt to dispel some of the myth surrounding filmmaking, and to explain it's like any other craft. A unique voice, thick skin, and a deep love of the work are required … and while he makes clear they don't by themselves ensure success, he's used them to find his own fulfillment and to help keep the self-doubt that confronts any artist at bay.” – The Week

“Chronicling the struggles and the long hours as well as the heady moments when months of planning and writing come to fruition, Independent Ed is a must-read for movie fans, film students, and everyone who loves a gripping tale about what it takes to forge your own path in work and life.” – Red Carpet Crash