Trucks I The Legend of Beverly Joe Breece (Paperback) 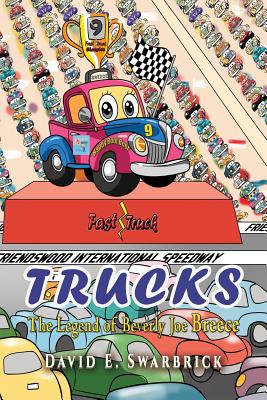 Trucks, The Legend of Beverly Joe Breece, is the first book in the The Fast Truck Series. On Sunday afternoons, trucks, teams, and fans alike gather together and partake in the making of history. Each event stands out as its own unique experience; ones that tickle the minds of all who's seen or heard them. Occasionally, there's some that stand out more than others. One time in particular, was when Beverly Joe Breece blasted her way in, knocked the door down, and nearly did it all. Setting the pace for the underdog to take over, she put her name in the books and inspired people everywhere.

And now Ladies and Gentlemen Boys and Girls Race fans of all ages Put on your helmets and fire suits Open this book, climb inside, and strap yourselves in Because, the story of The "Oil Cup" 400 and the chase to the season championship is about to begin Filled with high-speed straightaways and lightning-quick corners, The Legend of Beverly Joe Breece is surely a tale that will have your foot to the floor, your pistons pumping, and your tires spinning So, what are you waiting for? Come on Yippie, yippie, yay Let's grab the green flag and go racing

The "Oil Cup" 400; the "Crown Jewel" race in the Fast Truck Series has always been known to be one of the most competitive competitions in the Trucks Series season tour. Being the first race in the chase to the championship, tensions sometimes run high as teams strenuously work to be the one that puts their names and number in the books as the winner of the highest paying purse, and the largest trophy in the history of Stock Truck racing. From all over the globe, trucks with their teams come to qualify for a chance at the power and glory that comes with winning the 400-mile scrimmage to the checkered flag. Every year, spectators, young and old come from all corners of the world to witness one of, if not the, greatest spectacle in all of Motorsports. Time and time again, history proves that the 400 can be exceedingly challenging to trucks and teams: engines can fail, tires can falter, transmissions can go out, bodies can grow weary, and injuries from accidents will most certainly happen. Often called a race of "sheer endurance," and one that only the toughest trucks survive, seldom does the underdog set the pace for the grueling 200-lapper. Let alone, does a virtually unknown beat the top teams and secure themselves a second-place starting spot. However, at one magical point in time, an unlikely entry, and not a high favor to win, did just that Tearing up the track, Beverly Joe Breece sped her way along the 2-mile oval, and she kicked the door open, securing a position that put her and her team ahead of some of the sports strongest trucks What a memorable and exciting day it was when Beverly clenched her place and raced against some of the biggest names and well-seasoned teams to have ever run the event. It was a time where some went home empty-handed, some were victorious, others were defeated, and some set the stage for wonderful things to come. It was a day where legends were made...

Now let's drop those window nets, climb inside, strap yourself in, and read about how one truck defied the odds, gave it her utmost best, and became forever known as the Ford that nearly did it all.