Notes on a Shipwreck: A Story of Refugees, Borders, and Hope (Paperback) 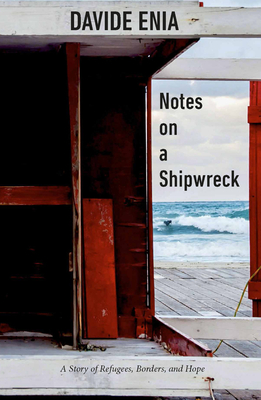 Davide Enia rightly believes that only its protagonists - the millions of people crossing deserts and seas in search for a better life - will be able to tell the story of the great migration that is changing the face of Europe. What he offers in the meantime, though, is equally necessary: by blending reportage from the Italian island of Lampedusa, Europe's southernmost point, with the story of the relationship with his father, Enia brings the enormity of the refugee crisis back to human proportions without losing any of its complexity. The questions posed by this book with raw, unsettling force go to the very heart of our civilization, showing both its corruption and possibility of redemption.

A moving firsthand account of migrant landings on the island of Lampedusa that gives voice to refugees, locals, and volunteers while also exploring a deeply personal father-son relationship.

On the island of Lampedusa, the southernmost part of Italy, between Africa and Europe, Davide Enia looks in the faces of those who arrive and those who wait, and tells the story of an individual and collective shipwreck. On one side, a multitude in motion, crossing entire nations and then the Mediterranean Sea under conditions beyond any imagination. On the other, a handful of men and women on the border of an era and a continent, trying to welcome the newcomers. In the middle is the author himself, telling of what actually happens at sea and on land, and the failure of words in the attempt to understand the present paradoxes.

Enia reveals the emotional consequences of this touching and disconcerting reality, especially in his relationship with his father, a recently retired doctor who agrees to travel with him to Lampedusa. Witnessing together the public pain of those who land and those who save them from death, alongside the private pain of his uncle's illness, pushes them to reinvent their relationship, to forge a new and unprecedented dialogue that replaces the silences of the past.

Davide Enia was born in 1974 in Palermo, Italy. He has written, directed, and performed in plays for the stage and for radio. Enia has been honored with the Ubu Prize, the Tondelli Award, and the ETI Award, Italy’s three most prestigious theater prizes. He lives and cooks in Rome.

Antony Shugaar is a writer and translator. His recent translations include Kill the Father and Kill the Angel by Sandrone Dazieri, The Catholic School by Edoardo Albinati, Everything Is Broken Up and Dances by Edoardo Nesi and Guido Maria Brera, and Notes on a Shipwreck by Davide Enia.

“[A] quiet yet urgent memoir…Notes on a Shipwreck rings graphically true…Enia’s understatement and touching humor help keep his own losses in perspective. His personal stories focus and footlight those of his witnesses…the book attests that a sincere engagement with global crises can grow only from a soil of sympathy that’s local and personal.” —New York Times Book Review

“Subtle meditation and devastating detail combine in this journalistic memoir…A potent narrative that builds from matter-of-fact observation through horrific experience toward a metaphysical acceptance that is something like a state of grace.” —Kirkus Reviews (starred review)

“Affecting…Passionate and compassionate…Enia’s intensely personal voice and his poetic language engage his audience in a difficult subject, producing a powerful result…This intimate look into the realities of the refugee crisis takes readers from emotional disconnect to a profound understanding.” —Shelf Awareness (starred review)

“Fascinating…This account of the migrant crisis is raw and tragic but also uplifting, full of hope, a story of courage, humanity, kindness, strength, and commonality…Enia has a way of gaining the confidence of interviewees that leads to a heart-breaking honesty…[a] brilliant translation of an important book.” —NB

“A haunting memoir about refugees and rescuers, survivors and strangers, fathers and sons. Especially rare—and searing—among the voices [Enia] captures are those of the rescuers, who face the terrible decision about whom to save and whom to abandon…[a] spectacular testimony.” —Christian Science Monitor