Story of My People: Essays and Social Criticism on Italy's Economy (Hardcover) 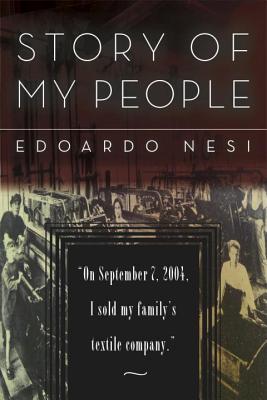 By Edoardo Nesi
$19.95
Email or call for availability

Winner of the 2011 Strega Prize, this blend of essay, social criticism, and memoir is a striking portrait of the effects of globalization on Italy’s declining economy.

Starting from his family’s textile factory in Prato, Tuscany, Edoardo Nesi examines the recent shifts in Italy’s manufacturing industry. Only one generation ago, Prato was a thriving industrial center that prided itself on craftsmanship and quality. But during the last decade, cheaply made goods—produced overseas or in Italy by poorly paid immigrants—saturated the market, making it impossible for Italian companies to keep up. In 2004 his family was forced to sell the textile factory. How this could have happened? Nesi asks, and what are the wider repercussions of losing businesses like his family’s, especially for Italian culture?

Story of My People is a denouncement of big business, corrupt politicians, the arrogance of economists, and cheap manufacturing. It’s a must-read for anyone seeking insight into the financial crisis that’s striking Europe today.

Edoardo Nesi is an Italian writer, filmmaker, and translator. He began his career translating the work of such authors as Bruce Chatwin, Malcolm Lowry, Stephen King, and Quentin Tarantino. He has written six novels, one of which, L'età dell'oro, was a finalist for the 2005 Strega Prize and a winner of the Bruno Cavallini Prize. He wrote and directed the film Fughe da fermo (Fandango, 2001), based on his novel of the same name, and has translated David Foster Wallace’s Infinite Jest.

Antony Shugaar is an author and translator. His most recent publication, written with the International Spy Museum in Washington DC, is I Lie for a Living, and he is the coauthor of Latitude Zero. His most recent translations include I Hadn’t Understood by Diego De Silva, The Nun by Simonetta Agnello Hornby, and The Path to Hope by Stéphane Hessel and Edgar Morin (Other Press, 2012). He is also a freelance journalist who reviews for the Boston Globe and the Washington Post.

"Edoardo Nesi has written a short memoir of great charm, for all its sadness a pleasure to read…  Mr. Nesi’s sense of loss will touch hearts much farther afield, wherever the West’s world-class industries have fallen to free trade and the Internet.”—The New York Times

“This unique book—part memoir, part argument for the reformation of the global financial system—tumbles out of itself on the page, and reading it was an equally propulsive experience. It rhapsodizes and slaps its chest in true Italian style, makes frequent allusions with a disarming bluntness (to Machiavelli, to Richard Ford, to Paul Newman movies), and always has something to say. I finished and instantly went back to re-read certain pages.” —John Jeremiah Sullivan, author of Pulphead and writer for the New York Times Magazine

“Who would have thought that memoir and polemic could work together so well? A totally absorbing story, and a portrait of modern Italy.” —Sarah Bakewell, author of How to Live

"A searing indictment of globalization’s failures, and the inability of politicians and pundits to consider its impact on real lives...much of the book is sad, honest, and biting; overall it is an important work." —Publishers Weekly

"We all know that globalization has disrupted industries around the world, but we don’t always connect disruption to the destruction of ways of life—the social fabric that globalization can rend and tear. Story of My People, by Edoardo Nesi, a polemic fueled by grief and rage at
the devastating effect of globalization on the Italian textile industry, makes that connection tangible." —Strategy+Business

"At once a memoir, a requiem, and a work of social and literary criticism about the toll this shift took on his city and psyche...fiercely angry, conflicted, and often beautifully written." —Bookforum

“Story of My People is a well-told story but also an eloquent and pained wail about loss. Globalization has swallowed up the artisans, the families and the beautiful fabrics at the heart of Prato’s weaving industry, and a world has unraveled like a skein of yarn. While Nesi clearly understands the economics and even the inevitability of this transition for Italy’s family manufacturers, he will not let this world disappear without describing it for the rest of us. A business and family can do everything right and still have everything go wrong. This is an important, poetic, and personal work of industrial history.” —Pietra Rivoli, author of The Travels of a T-shirt in the Global Economy

“A remarkable evocation of the vanished world of artisan capitalism in Tuscany, swept away by hurricane globalization. ‘Why should this destruction be?’ asks the author and former owner of a small family textile business, in a mingled cry of pain and anger.” —Robert Skidelsky, author of How Much is Enough?: Money and the Good Life

“Nesi is one of the few writers that have succeeded in depicting the dark underbelly of globalism.” —Luciano Lanna, Secolo d’Italia

“A beautiful and touching book … Whether or not you agree with its message, it has one undeniable virtue: it makes you think.” —Giorgio Marabini, Sabato Sera

“Story of My People is a transcendent song, both epic and lyrical, on industrial and human labor.” —Antonio Pennacchi

“Do you know what I would do if I became leader of the Democratic Party? I would take this courageous book and turn it into a chapter of my political project. Story of My People is about the love of a people for its roots, a community for its land, and a city for its industry.” —Massimo Giannini

"A tour de force that spares no one."—Kirkus

"...few have produced an account of globalization’s effects as personal, poignant, and beautifully written as Edoardo Nesi’s Story of My People."—New York Journal of Books

"...now we have another classic by someone on the wrong end of history..."
—Finance & Development

"The story of Prato's demise is lyrically written and deeply moving."—Finance & Development

"...an eloquent, emotion-laden, and, I think, essential addition to the globalization bookshelf....If I was a publisher, this is a book I’d be proud to put out."
—Strategy+Business

"From the 1950s to the 1980s, much of Italy was a charmed place, its beauty wreathed in wealth. Edoardo Nesi’s gracefully nostalgic memoir, Story of My People, is of that time…You feel saddened for the narrator and his family, and what they have lost. You feel saddened with him too, as you recognise in yourself something of the same regret for a world – not just an Italian one – that is passing. The fact that this regret is thickly gilded with sentiment makes it no less poignant. Edoardo Nesi has mined his own memories, and thus touches ours...”—The Financial Times

"The brilliance of this depressing story (winner of Italy’s Strega Prize) is Edoardo Nesi’s imaginative fusion of history and autobiography, infused with vignettes of the lives of individual workers who have suffered. Yes, this is also the author’s account of how he became a successful writer. But most of all it is the depiction of an era that is just about over, at the end of its collapse."—Counterpunch

"Story of My People is an angry, eloquent, and beautifully written book..."—The Millions

"[Story of My People] has the driving force of a polemic but the wisdom of a novel, and is the only book about the global recession I’d recommend to anybody, though you need have no interest in the economy to pick it up. It is one of the best books I’ve read all year without question."—Library Reads

"[Nesi's] heartbreaking narrative describes a struggling country that is just as fascinating and rich as the Italy advertised through the tourism industry, and much more real." —Triquarterly

"[T]he single best book about globalization…in long time. [Story of my People]  takes the abstract implications of globalization and reduces it to a very personal level." —Publishing Perspectives

[A]n unfamiliar mix of memoir and the politics of business...worth reading for anyone who likes good writing and wants a deeper understanding of either contemporary Europe or global business. —Book News