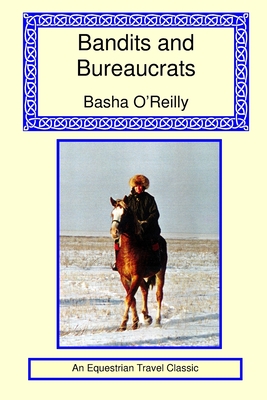 By Basha O'Reilly
$22.00
Not On Our Shelves - Available to Order

It seemed like a perfectly natural thing to do. Go to Russia, befriend the Cossacks, buy a stallion and then trot him more than 2,500 miles back to England. Of course the Soviet Union had just collapsed and no one had ever been allowed to ride out of that communist empire. But such minor obstacles didn't deter the author of this singular book.
"Bandits and Bureaucrats" unfolds in 1995 when unstable political conditions allowed Basha O'Reilly to travel through a recently off-limits country. What she found was a nation in unexpected transition. Emerging from decades of brutal governance, for a brief moment in time Russia's rules were no longer enforced and a rare opportunity existed to cross the secretive nation on horseback.
Unexpected discoveries quickly followed. Because of decades of communist repression, ordinary people had never seen a woman in the saddle and in a landscape devoid of fences Basha rode from Russia into Belarus simply by crossing a river.
Though she relished the simplicity of this new life, the author had to contend with the harsh realities of equestrian travel including KGB interviews, risky rapists and horse-hating bureaucrats. With its rich details, the book qualifies as an important addition to the history of equestrian travel. Yet there is more to this tale than reaching a distant geographic goal.
Written by one of the foremost female equestrian explorers alive today, Basha's story explains how the journey encouraged her to change the direction of her life. When the western obsession with possessions was replaced with a love of personal liberty, what appeared to be the end of a journey was only the beginning of a life lived at the gallop.
Sometimes our soul's song stirs. The ice that has confined us begins to crack. Lethargy burns off in the heat of a newly-discovered passion.
Gypsy blood, long denied, sings to a moon long ignored. And our life is suddenly taken away from where we lived, from what we knew, from who we were. Here is the tale of how a brave woman discovered a horse that took her past frontiers, both physical and spiritual, into a new history, a new life, and a new name.
The result is that this is not a simple travel tale. It is the remarkable story of a woman's transformation and the magnificent Cossack stallion that went on to become the symbol of the international Long Riders' Guild.