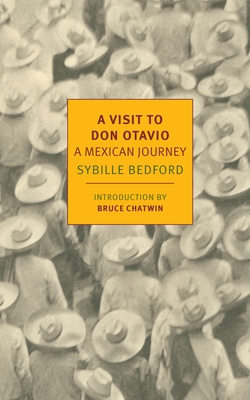 By Sybille Bedford, Bruce Chatwin (Introduction by)
$18.95
On Our Shelves

In the mid-1940s, Sybille Bedford set off from Grand Central Station for Mexico, accompanied by her friend E., a hamper of food and drink (Virginia ham, cherries, watercress, a flute of bread, Portuguese rosé), books, a writing board, and paper. Her resulting travelogue captures the violent beauty of the country she visited.

Bedford doesn’t so much describe Mexico as take the reader there—in second-class motor buses over thousands of miles, through arid noons and frigid nights, successions of comida corrida, botched excursions to the coast, conversations recorded verbatim, hilarious observations, and fascinating digressions into murky histories. At the heart of the book is the Don Otavio of the title, the travelers’ gracious host, his garrulous family and friends, and his Edenic hacienda at Lake Chapala. Published in 1953, A Visit to Don Otavio was an immediate success, “a travel book written by a novelist,” as Bedford described it, establishing her reputation as a nonpareil writer.

Sybille Bedford (1911–2006) was born Sybille von Schoenebeck in Charlottenburg, Germany, to an aristocratic German father and a partly Jewish, Hamburg-born mother. Raised variously in Germany, Italy, France, and England, she lived with her mother and Italian stepfather after her father’s death when she was seven, and was educated privately. En­cour­aged by Aldous Huxley, Bedford began writing fiction at the age of sixteen and went on to publish four novels, all influenced by her itinerant childhood among the European aristocracy:  A Legacy (an NYRB Classic),  Jigsaw (short-listed for the 1989 Booker Prize), and A Favourite of the Gods and A Compass Error (forthcoming from NYRB in a single volume in 2017). She married Walter Bedford in 1935 and lived briefly in America during World War II, before returning to England. She was a prolific travel writer, the author of a two-volume biography of her friend Huxley, and a legal journalist, covering nearly one hundred trials. In 1981 she was awarded the Order of the British Empire.

Bruce Chatwin (1940–1989) was born in Sheffield, England. He was appointed a director of Sotheby’s at age twenty-five, but left to study archaeology at the University of Edinburgh and soon began a career as a travel writer for The Sunday Times Magazine. His 1977 book In Patagonia is considered a classic in the field of travel writing, and his 1988 novel, Utz, was short-listed for the Man Booker Prize.

"Bedford treats many aspects of Mexican culture and daily life with humor and grace: the slow passing of time, religious and civil fiestas…siestas and gunfights, bejeweled women an their sinful secrets, the music…and political gossip.” —Enrique Krauze, The New York Review of Books

“Bedford is a beloved writer, and this travel memoir, originally published in 1953, brings all the same brilliance…Her impromptu trip is narrated in such amazing detail that you’ll delay the end, hoping the adventure will go on and on.” —Claire Luchette, Travel + Leisure

“Before I am ready to call it quits, I would like to reread every book I ever deeply enjoyed, beginning with Jane Austen and Isaac Babel and Sybille Bedford’s A Visit to Don Otavio.” —William Maxwell

“A powerful response to landscape and to people. Mrs. Bedford has the art of putting one bodily in the country with all senses awake, and one emerges with her from the Mexican experience bruised, shocked, but elated and with one’s brain turned on.” —V. S. Pritchett, New Statesman

"One of the great works of travel literature.”—Benjamin Schwarz, The Atlantic

“Here is Bedford in all her glory: the adventurer, the Bohemian, the reporter, the philosopher, the aesthete. Far from rendering the text chaotic, it thrives on these contrasting dimensions, engaging the reader on multiple levels and conveying the full range of Bedford’s many talents. Above all, what comes across is her sense of jouissance and fascination with the world.” —Hans Rollan, PopMatters

“An amusing yet highly serious interpretation of Mexico.”—Shusha Guppy, The Paris Review

“A rare gem, poised, vivacious and with a delicate and finely-tuned sense of humor.”—Barbara Kastelein, Inside Mexico

“Everyone, whether or not he plans to visit Mexico, should read A Visit to Don Otavio.”—The New Yorker

“Of all the women writers of this century, Sybille Bedford is, to my mind, the finest.”—Julia Neuberger, Evening Standard

“[Bedford] is capable of exercising a fine sort of detachment while telling an intensely personal story.”—Virginia Lee Warren, The New York Times