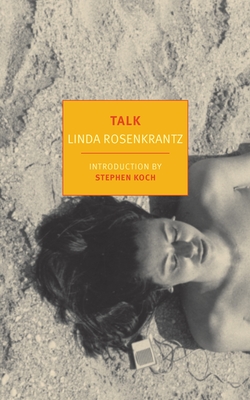 Talk is a hilariously irreverent and racy testament to dialogue: the gossip, questioning, analysis, arguments, and revelations that make up our closest friendships. It’s the summer of 1965 and Emily, Vincent, and Marsha are at the beach. All three are ambitious and artistic; all are hovering around thirty; and all are deeply and mercilessly invested in analyzing themselves and everyone around them. The friends discuss sex, shrinks, psychedelics, sculpture, and S and M in an ongoing dialogue where anything goes and no topic is off limits. Talk is the result of these conversations, recorded by Linda Rosenkrantz and transformed into a novel whose form and content put it well ahead of its time. Controversial upon its first publication in 1968, Talk remains fresh, lascivious, and laugh-out-loud funny nearly fifty years later.

Linda Rosenkrantz is the author of several books of fiction and nonfiction—including Telegram, a history of telegraphic communication and My Life as a List: 207 Things About My (Bronx) Childhood, a memoir—and is the co-author of Gone Hollywood: The Movie Colony in the Golden Age. A longtime syndicated columnist, she was the founding editor of Auction magazine, as well as a founder of the popular baby-­naming site Nameberry.com. Rosenkrantz was born and raised in New York City and currently lives in Los Angeles.

Stephen Koch is the author of two novels, Night Watch and The Bachelor’s Bride, and of several nonfiction works: Stargazer: Andy Warhol’s World; Double Lives: Stalin, Willi Münzen­berg and the Seduction of the Intellectuals; The Breaking Point: Hemingway, Dos Passos, and the Murder of José Robles; and The Modern Library Writer’s Workshop. He lives in New York City, where he is the director of the Peter Hujar Archive.

“Now reissued, it remains fresh, funny and disarming...The three friends provide great entertainment even (or especially) in the grips of competitive neuroses and misanthropy.” —John Williams, The New York Times

″Talk is an era-defining text. With its unvarnished ‘realism’ and its celebration of marginalized groups, Talk argues that the everyday language of men and women is valuable, important, and worthy of a book.” —The Millions

“A novel like this is what results when you bring a tape recorder to the beach with your super smart friends….compulsively readable, eternally relevant.”—Emily Temple, Flavorwire

“Rosenkrantz and her friends are living a hippie lifestyle before the hippie lifestyle took hold, but they approach it as creative intellectuals...There's a realness to the way they relate to one another and the world.” —Carolyn Kellogg, Los Angeles Times

“Today the book reads well, as smart and up-to-date as an episode of Girls or Broad City – after half a century it's still a terrific beach read.”—Michael Silverblatt, KCRW's Bookworm

“Are New Yorkers the best talkers in the world? We’ve become familiar now with this style of talk – smart, witty, ironic, tangential, obsessing over trivia – through sitcoms like Friends; but Rosenkratz was among the first to realise that it’s an art-form in its own right.”—Brandon Robshaw, The Independent (UK)

“Talk gave me a sizzling Warholian window into the smart-mouthed freaky New York scene of the late 1960s. I was overwhelmed by a desire to jump in a time machine.” —Simon Doonan, author of The Asylum

“The rawest of raw material is hashed over in detail, but with such openness and enthusiasm that one is more delighted and stimulated than embarrassed or shocked.”  —James Leo Herlihy, author of Midnight Cowboy

“The pattern of self-revelation is far from coarse: it is eloquent and convincing, with its insights suddenly stumbled upon, its slender bridges of nervous sympathy that join each private island to the threatening outside world.”  —Norman Shrapnel, The Guardian

“It is sometimes hard to remember just how radical Talk was when it was published. Rosenkrantz’s innovative process of using transcribed recorded conversation as dialogue introduced a level of reality not unlike the choice to paint from photographs instead of live models.” —Chuck Close

“Cool, astringent...something new, something beyond black humor or pop fiction.” —The New Republic

“The characters are defined by speech alone, and the talk is of a kind that has been missing from literature...Miss Rosenkrantz’s importance as a writer is to have shown, right away in her first book, that exact data can go into a novel without the pressures of conventional plot and character requirements.” —Vogue

"Talk is smart and funny and raunchy, and very very quotable.” —The Toast

“Perfect for when you go to the beach alone then decide you could use some company.”—Donald Stahl, Blouin Artinfo