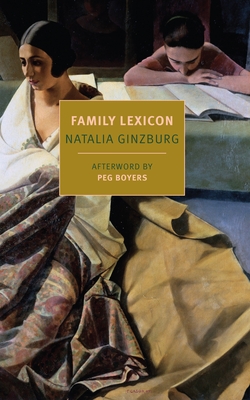 What is the essence of family unity? For Natalia Ginzburg, it's first and foremost words, a common vocabulary, the shared life and habits they evoke. With luminous prose and extraordinary emotional sincerity, the author tells the story of her antifascist Jewish family during the dark years of Mussolini's regime. Part fiction, part memoir, Family Lexicon is funny yet deeply moving; a celebration of the time-transcending connections we make in early life - forever holding the memory of who we were, as well as the promise of who we can become.

The fascism and repression enveloping Italy in Ginzburg's most personal novel take a backseat, giving way to a funny portrait of family. Here, dialogue is less like conversation and more like a slow chant that'll stay in your head long after the book is over. A perfect document of what it means--and feels like--to be close to someone.

A masterpiece of European literature that blends family memoir and fiction

An Italian family, sizable, with its routines and rituals, crazes, pet phrases, and stories, doubtful, comical, indispensable, comes to life in the pages of Natalia Ginzburg’s Family Lexicon. Giuseppe Levi, the father, is a scientist, consumed by his work and a mania for hiking—when he isn’t provoked into angry remonstration by someone misspeaking or misbehaving or wearing the wrong thing. Giuseppe is Jewish, married to Lidia, a Catholic, though neither is religious; they live in the industrial city of Turin where, as the years pass, their children find ways of their own to medicine, marriage, literature, politics. It is all very ordinary, except that the background to the story is Mussolini’s Italy in its steady downward descent to race law and world war. The Levis are, among other things, unshakeable anti-fascists. That will complicate their lives.

Family Lexicon is about a family and language—and about storytelling not only as a form of survival but also as an instrument of deception and domination. The book takes the shape of a novel, yet everything is true. “Every time that I have found myself inventing something in accordance with my old habits as a novelist, I have felt impelled at once to destroy [it],” Ginzburg tells us at the start. “The places, events, and people are all real.”

Natalia Ginzburg (1916–1991) was born Natalia Levi in Palermo, Sicily, the daughter of a Jewish biologist father and a Catholic mother. She grew up in Turin, in a household that was a salon for antifascist activists, intellectuals, and artists, and published her first short stories at the age of eighteen; she would go on to become one of the most important and widely taught writers in Italy, taking up the themes of oppression, family, and social change. In 1938, she married Leone Ginzburg, a prominent Turinese writer, activist, and editor. In 1940, the fascist government exiled the Ginzburgs and their three children to a remote village in Abruzzo. After the fall of Mussolini, Leone fled to Rome, where he was arrested by Nazi authorities and tortured to death. Natalia married Gabriele Baldini, an English professor, in 1950, and spent the next three decades in Rome, London, and Turin, writing dozens of novels, plays, and essays. Lessico famigliare (Family Lexicon) won her the prestigious Strega Prize in 1963 and La famiglia Manzoni was awarded the 1984 Bagutta Prize. From 1983 to 1987, she served in the Italian parliament as an Independent (having left the Communist Party), where she dedicated herself to reformist causes, including food prices and Palestinian rights.

Jenny McPhee is a translator and the author of the novels The Center of Things, No Ordinary Matter, and A Man of No Moon. She is the director of the Center of Applied Liberal Arts at New York University and lives in New York.

Peg Boyers teaches poetry and translation at Skidmore College and at the Columbia University School of the Arts. She is the executive editor of Salmagundi Magazine and the author of three books of poetry published by the University of Chicago Press. One of those books, Hard Bread, is based on the life of Natalia Ginzburg.

"It’s life-changingly good. It’s a lesson in how to live." —Monica Ali, Elle

"Jenny McPhee’s new translation… reads as more contemporary, immediate, and dynamic. Critically, McPhee’s translation emphasizes how language operates within the closed system of a family… In Family Lexicon, familiar words and phrases are the fragments that conjure glimpses of a more complete world, summon what and who has been lost and allow them to continue, to coalesce, condense, collapse. To be carried away, yes, and to carry on." —Emily LaBarge, Bookforum

“One of Italy’s finest postwar writers. . . . If Elena Ferrante is a master of the sprawling, unputdownable epic, Ginzburg is a miniaturist. Her themes are buried in gestures, fragments, absences—not in what is said, but in what is not said. . . . Her masterpiece—the hyperbole is warranted—is Family Lexicon.” —Negar Azimi, Bookforum

“The raw beauty of Ginzburg’s prose compels our gaze. First we look inward, with the shock of recognition inspired by all great writing, and then, inevitably, out at the shared world she evokes with such uncompromising clarity.” —Hilma Wolitzer

“There is no one quite like Ginzburg for telling it like it is. Her unique, immediately recognizable voice is at once clear and shaded, artless and sly, able to speak of the deepest sorrows and smallest pleasures of everyday life.” —Phillip Lopate

“A glowing light of modern Italian literature...Ginzburg’s magic is the utter simplicity of her prose, suddenly illuminated by one word that makes a lightning stroke of a plain phrase...As direct and clean as if it were carved in stone, it yet speaks thoughts of the heart.” —Kate Simon, The New York Times

"Ginzburg was a masterful writer, a witty, elegant prose stylist, and a fiercely intelligent thinker….This 1963 novel, newly translated by novelist McPhee, is a genre-defying work. It reads like a memoir, but it doesn’t adhere to the conventions of either fiction or nonfiction….

“The atmosphere of the book is so clear and immediate that reading it is like being there or seeing a film.” —The Christian Science Monitor

“Her simplicity is an achievement, hard-won and remarkable, and the more welcome in a literary world where the cloak of omniscience is all too readily donned.” —William Weaver, The New York Times


Praise for A Place to Live: And Other Selected Essays of Natalia Ginzburg

“There is no one quite like Natalia Ginzburg for telling it like it is. Her unique, immediately recognizable voice is at once clear and shaded, artless and sly, able to speak of the deepest sorrows and smallest pleasures of everyday life. For all those like myself who love Natalia Ginzburg’s prose, this generous selection assembled from her essay collections will be irresistible, a must to own, cherish, and re-read.” —Phillip Lopate

“The raw beauty of Natalia Ginzburg’s prose compels our gaze. First we look inward, with the shock of recognition inspired by all great writing, and then, inevitably, out at the shared world she evokes with such uncompromising clarity.” —Hilma Wolitzer