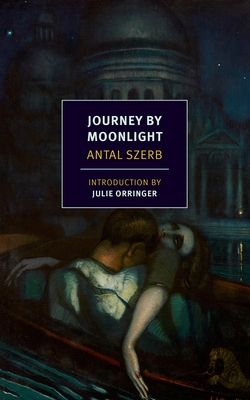 Szerb described his own writing as "neo-frivolous" which is better than anything I can say. Nevertheless, I'll urge you to take a chance on this irresistibly delightful story of a wishy-washy Budapestian antihero who slinks away from his elegant wife on their honeymoon in Venice, and then wanders aimlessly through Italy, recalling and reliving the mysterious, magical friendships of his youth. Something like The Secret History meets Henry James, Journey by Moonlight is at turns haunting and hilarious, deeply serious and deeply silly in perfect measure.

On a summer’s night a traveller goes on a wild sheep chase through Italy’s invisible cities and grand hotels (did I mention he’s from Budapest?) Never has a nostalgia trip been this thrilling, never has death been this sexy, never has a honeymoon gone this poorly!

The trouble begins in Venice, the first stop on Erzsi and Mihály’s honeymoon tour of Italy. Here Erzsi discovers that her new husband prefers wandering back alleys on his own to her company. The trouble picks up in Ravenna, where a hostile man zooms up on a motorcycle as the couple are sitting at an outdoor café. It’s János, someone Mihály hasn’t seen for years, and he wants Mihály to come with him in search of Ervin, their childhood friend. The trouble comes to a head when Mihály misses the train he and Erzsi are due to take to Rome. Off he goes across Italy, wandering from city to city, haunted and accosted by a strange array of figures from the troubled youth that he thought he had left behind: There are the charismatic siblings, Éva and Tamás, whose bizarre amateur theatricals linked sex and death forever in his mind; Ervin, a Jew turned Catholic monk who was his rival for Éva’s love; and again, that ruffian on the motorcycle.

Antal Szerb’s dreamlike adventure, like Bulgakov’s The Master and Margarita, is an intoxicating, utterly individual mix of magic, madness, eros, and menace. In the words of the critic Nicholas Lezard, “No one who has read it has failed to love it.”

Antal Szerb (1901–1945) was born in Budapest into a middle-class family that had converted from Judaism to Catholicism. He studied German and English literature at the University of Budapest, receiving a PhD in 1924. Throughout the second half of the 1920s he lived in France, Italy, and England, where he worked on his first book, An Outline of English Literature (1929). In 1933 he was elected the president of the Hungarian Literary Academy and the next year published his History of Hungarian Literature, called by John Lukacs, “not only a classic but a sensitive and profound description of . . . the Magyar mind.” It was followed in 1941 by a three-volume History of World Literature. In addition to his critical writings, Szerb produced many works of translation, and published newspaper articles, essays, reviews, short stories, and novels, of which The Pendragon Legend (1934), Love in a Bottle (1935), The Third Tower (written in 1936), Journey by Moonlight (1937), Oliver VII (1937), and The Queen’s Necklace (1943) have been translated into English. Having lost his university teaching position as a result of Hungary’s anti-Semitic laws, Szerb was sent to a labor camp, where it is believed he was beaten to death. He was survived by his wife, Klára Bálint, who died in 1992.

Len Rix is a poet, critic, and former literature professor who has translated five of Antal Szerb’s books into English, including the novels The Pendragon Legend and The Queen’s Necklace, and most recently, the travel memoir The Third Tower. In 2006 he was awarded the Oxford-Weidenfeld Translation Prize for his work on Magda Szabo’s The Door (forthcoming from NYRB Classics).

Julie Orringer is the author of The Invisible Bridge, a novel, and How to Breathe Underwater, a collection of stories. Currently at work on a novel about Varian Fry, Orringer is a 2014–15 Guggenheim Fellow and a recent Radcliffe Fellow. Her work has been translated into fifteen languages and widely anthologized, and her first novel is being adapted for film by the director Lajos Koltai. Inquiry into her family history revealed that her grandfather, Andrew Tibor, a Hungarian forced-labor conscript, served at the same camp where Szerb died in 1945.

"Journey by Moonlight is a beautiful book, the sort of book that stays imprinted on some soft part of you for a long time. Its intelligence is so humane—so forgiving to the last...And from the wreckage of the Holocaust, from such horrible annihilation, from such a violent silencing of so many voices, this extraordinary novel emerges as another improbable survival." —Becca Rothfeld, The New Republic

“A writer of immense subtlety and generosity....Can  literary mastery be this quiet-seeming, this hilarious, this kind? Antal Szerb is one of the great European writers.” —Ali Smith

“Just divine...I can’t remember the last time I did this: finished a novel, and then turned straight back to page 1 to start it over again. That is, until I read Journey by Moonlight...It’s a comedy, but a serious and slyly clever one, the kind of book that makes you imagine the author has had private access to your own soul...Len Rix [has] managed to translate Szerb’s book into beautifully fluent English, and what we have is a work of comedy and depth, the comedy all the more striking in that the chief subjects of the book are abnegation and suicide...No one who has read it has failed to love it.” —Nicholas Lezard, The Guardian

“A novel to love as well as admire, always playful and ironical, full of brilliant descriptions, bon mots and absurd situations...it’s a book utterly in love with life.” —Kevin Crossley-Holland, The Guardian, Books of the Year

“This radiantly funny and intelligent novel...shows its author to be one of the masters of twentieth-century fiction. Len Rix’s loving translation of a book that might have remained lost to us deserves special praise.” —Paul Bailey, The Times Literary Supplement, International Books of the Year

“Szerb’s first novel exulted in the absurdity of life while his last despaired over it. His most well-known work, Journey by Moonlight, written in 1937, maintained a powerful tension between both...May Szerb’s re-entrance into our literary pantheon be definitive.” —Alberto Manguel

“Mihály’s relationship with Tamás is so myopic and worshipful as to bring back memories of Death in Venice, but I respect Szerb’s book more...the book is one of the few written before the deluge that acknowledges a bourgeois unreality with an unblinkered eye.” —David Auerbach

“One of the friends I mentioned put a small book in my hand and said: ‘Len, you must read this. Every educated Hungarian knows and loves this book.’ It was Antal Szerb’s Utas és holdvilág. Within a few pages I knew it was a great European novel, and I determined not just to translate it but to try and give it a translation of the literary quality it deserves.” —Len Rix

“A veritable avalanche of brilliant perceptions...It’s all so earnest, so up-to-date, so symbolic, so sophisticated, so marvelously pleased with itself and yet so naïve and unhappy you don’t know whether to consume the book at a sitting or throw it away...Journey by Moonlight is a burning book, a major book.” —George Szirtes

“A stealthy masterpiece...both comic and beautiful.” —The Telegraph

“Wonderfully wry...We owe thanks to Len Rix, Szerb’s accomplished translator, for his part in raising from the dead a writer of such cool irony and historical sympathy.” —New Statesman

“[A] great masterpiece of high modernism…a bildungsroman of the twentieth century itself. In translator Len Rix’s gifted hands, it becomes a powerful and poignant testament to Antal Szerb’s learning and speaks to his many accomplishments…At its heart, Szerb’s narrative is a remarkable, painstaking study of a man’s fascination with his own mortality.” —Carla Baricz, Words Without Borders