On Being Blue: A Philosophical Inquiry (Paperback) 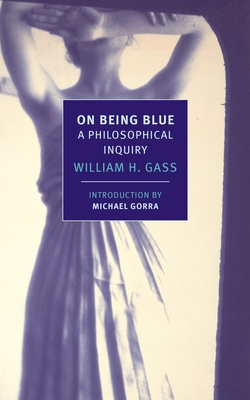 Feeling a bit blue, you wander through the family attic. You discover a cerulean chest, adorned with fiery blue opals, awaiting your open sesame. Tentatively raising the lid, you're blinded with wonder. The chest is overflowing with blue: glorious, wild, lunatic blue; blue objects; blue language; blue attributes and allusions; the emergence and evolution of blue; aesthetic theories of color, filtered through blue; celestial and spiritual blues; sexually charged blue humor; insinuations of blue sex in literature (Flaubert, Colette, Barth, Proust); our meager sexual vocabulary measured against the breadth of blue; blue shaping our intimate encounters, dreams, nightmares; our singular identity and the inevitable interiority of blue. You savor the Gassian lists and litany: Greek philosophers parsing perception and boundaries; poets, painters performing blue; blue in Christian iconography, history, war. At the bottom of all this blue, you rescue a slim, blue book: On Being Blue: A Philosophical Enquiry; you're dazed, vertiginous, transformed by the spell of blue; you hallucinate the storm blue eyes of William Gass; you caress the book with your blue stained fingers, chanting relentless, obsessive, incantatory allegiance to blue.

On Being Blue is a book about everything blue—sex and sleaze and sadness, among other things—and about everything else. It brings us the world in a word as only William H. Gass, among contemporary American writers, can do.

Gass writes:
Of the colors, blue and green have the greatest emotional range. Sad reds and melancholy yellows are difficult to turn up. Among the ancient elements, blue occurs everywhere: in ice and water, in the flame as purely as in the flower, overhead and inside caves, covering fruit and oozing out of clay. Although green enlivens the earth and mixes in the ocean, and we find it, copperish, in fire; green air, green skies, are rare. Gray and brown are widely distributed, but there are no joyful swatches of either, or any of exuberant black, sullen pink, or acquiescent orange. Blue is therefore most suitable as the color of interior life. Whether slick light sharp high bright thin quick sour new and cool or low deep sweet dark soft slow smooth heavy old and warm: blue moves easily among them all, and all profoundly qualify our states of feeling.

William H. Gass (b. 1924) is an essayist, novelist, and literary critic. He grew up in Ohio and is a former professor of philosophy at Washington University. Among his books are six works of fiction and nine books of essays, including Tests of Time (2002), A Temple of Texts (2006), and Life Sentences (2012). New York Review Books will republish his story collection In the Heart of the Heart of the Country (1968) in 2014. Gass lives with his wife, the architect Mary Gass, in St. Louis.

Michael Gorra’s Portrait of a Novel: Henry James and the Making of an American Masterpiece (2012) was a finalist for both the Pulitzer Prize and the National Book Critics Circle Award in Biography. His earlier books include After Empire: Scott, Naipaul, and Rushdie (1997) and The Bells in Their Silence: Travels Through Germany (2004). He has taught at Smith College since 1985, where he is now the Mary Augusta Jordan Professor of English. He lives in Northampton, Massachusetts, with his wife and daughter.

"'Blue' is poetically reconfigured as a shifting state to which the beholder perpetually attunes." —New Statesman

"[On Being Blue] is a talismanic, self-contained kind of book that seems more giving, more delicious each time one returns." —Brian Dillon, The Guardian

"The mark of a good essay is its ability to span worlds — illuminate complex ideas with a careful, personal touch. In On Being Blue there is life and death, pleasure, sadness, sex, personhood, theology — worlds of words." —Jaun Vidal, NPR

“A book no person who loves writing and the sound writing makes should be without.” —The New Republic

“Gass is a philosopher-voluptuary, someone who romances language with a roué’s cunning, and isn’t afraid to play with words and ideas for sheer sport." —Diane Ackerman

“On Being Blue is a luminous work, a tour de force on blue, that word (and color) reverberant with what is called experience. On Being Blue celebrates both language and that which it represents and carefully draws our attention to that difficult middle ground on which the writer finds himself in lifelong struggle to join the two without sullying or smearing the clarities of either.” —Gilbert Sorrentino

“A blue-black, slightly brackish beauty of a book, a philosophical essay written, for the most part, with the lilt of a Renaissance epithalamium.” —Larry McMurtry, The Washington Post Book World